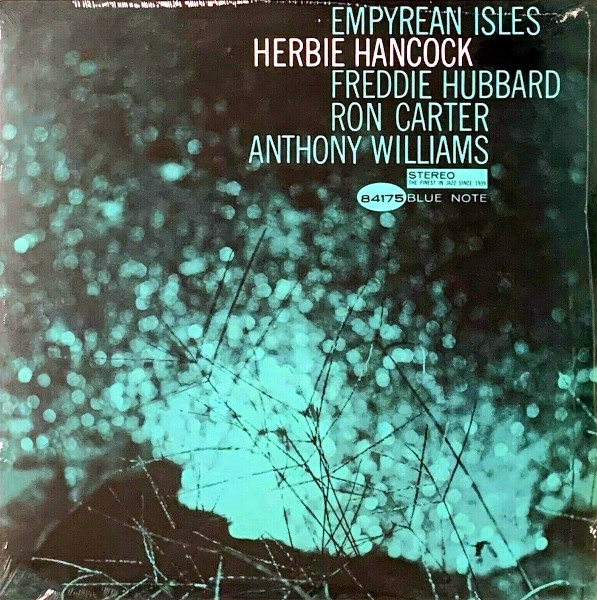 An impressive hard-bop buffet of cantaloupe and egg featuring three-fifths of the Miles Davis Quintet plus Freddie Hubbard.

This is the first truly great Herbie Hancock record (in my unlearned opinion), featuring the current Miles Davis lineup with Freddie Hubbard in place of Davis. Hubbard immediately rises to the challenge with a brilliant performance on the opening One Finger Snap. This first track is fiery stuff played at breakneck speed with precision and soul, breathtaking in execution and rich in the musical possibilities brought into its expansive vista.

The influence of Miles had a remarkable effect on everyone; compare this to the performance of Hancock and Tony Williams on My Point of View from the previous year, and you’ll swear that years have passed. Williams was still developing his trademark style, but the solo on “One Finger Snap” is a quantum leap in the right direction. The second track, Oliloqui Valley, is one of my favorite Hancock compositions of all time. Where the opening number rushes in, this song is cautious coolness that gives Hancock the spotlight. Ron Carter’s solo during “Oliloqui Valley” is classic; he literally pulls the song apart in a slow-motion dissection of his instrument. (The alternate take of “Oliloqui Valley” included on the expanded remaster features a less radical solo.)

The classic Cantaloupe Island joins a storied line of tasty treats to come from Hancock’s amazing melon and outswings them all. The record ends on an experimental note with The Egg, an avant-garde exploration of sound and musical interrelationships that couldn’t be more far removed from “Cantaloupe Island” if they were Australia and Antigua. The earlier albums from Hancock, while enjoyable, were mere sketches compared to the masterpieces of Empyrean Isles, Maiden Voyage and Speak Like A Child, any one of which is likely to turn up in a list of the greatest jazz albums of all time.