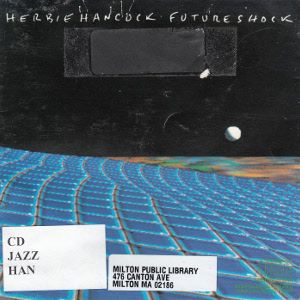 Kronomyth 35.0: SHOCK A KHAN. You wake up one morning, wash your face, turn on the idiot box and find that the revolution is not only being televised but choreographed to disembodied legs. Such was the Future Shock that audiences encountered in 1983 when Herbie Hancock and Material released this revolutionary, revelatory record. Future Shock didn’t just reboot Herbie Hancock’s career, it pressed the reset button on music. If you’d been watching Bill Laswell and Material, you knew they were fomenting revolution with their brand of dub, punk and funk. With Hancock, Material now had a hero for their platform, one who brought extensive jazz/funk credentials to the movement. The result is one of the most important (if not the most important) Material collaboration/mutation. True to its name, Future Shock felt like something from the distant future: sounds and styles collided, scratching turntables gave way to fluid jazz passages, computers shared space with sacred drums, and underneath it all was Laswell’s bass, grooving to its own inner drummer. Some of this isn’t far removed from Hancock’s earlier funk and fusion forays (e.g., “Future Shock,” “TFS”), but most of it represents a new journey for the jazz titan. “Rockit,” “Earth Beat” and “Autodrive” sound like nothing else in his catalog (or anyone’s catalog, for that matter). Jazz has always been an inclusive art form, but Hancock and Laswell took the doors off the hinges on this album to squeeze as many new ideas as possible into its accommodating parlor. Hard to believe that Malcolm McLaren’s “Buffalo Gals” was the inspiration for this, since the one is a one-dimensional novelty (albeit a brilliant novelty) and the other a nova in the annals of popular music. Hancock and Material repeated the experiment the following year with Sound-System; both records remain remarkably fresh thirty years on.

All songs written by Herbie Hancock, Bill Laswell and Michael Beinhorn unless noted.