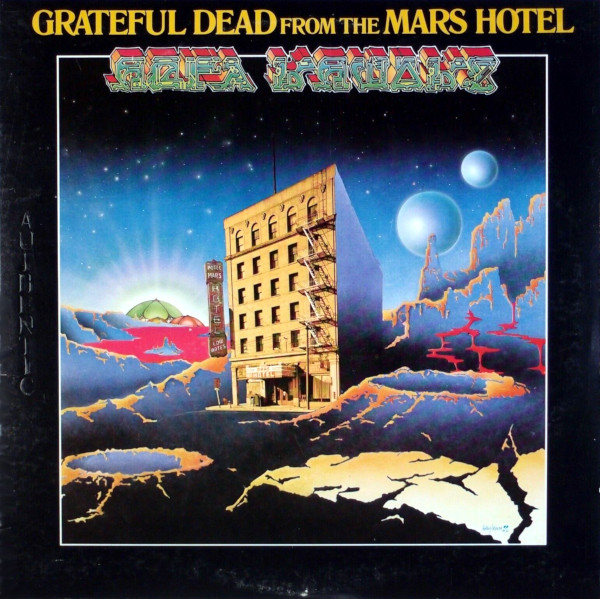 You’ll find a few classic Dead tracks on here, and two songs from Phil Lesh, but I got board with Mars Hotel pretty fast.

You can learn a lot about a person by looking at their music collection. You can learn what people want you to think about them by looking at their book collection. I remember visiting a friend of mine and noticing among his odd-dozen compact discs only one Grateful Dead disc, From The Mars Hotel. Odds are, he wasn’t a big Deadhead, not because he only had the one Dead disc, but because the one disc he did have is one of their worst.

The Dead seemed lost in the mid Seventies. Wake of the Flood was an interesting move, albeit unexpected. From The Mars Hotel seems like a standing in place, and for the first time the band sounds tired. I wouldn’t lay the blame on Keith and Donna Jean Godchaux, though I would tell you that Keith’s keyboards don’t mingle with the music so much as embellish it and Donna Jean’s role as a full-time member is questionable—she’s essentially a backing vocalist on this record. No, the real problem lies with the Dead themselves.

The Dead were always greater than the sum of their parts. Sure, they sometimes struggled to make the right connections in the studio, but there was always a measurable difference between a new Dead record and, say, a Jerry Garcia album. “China Doll” and “Scarlet Begonias” are measurably better than what you could expect from the Jerry Garcia Band. “Loose Lucy,” “Ship of Fools” and “U.S. Blues” are not. You can add Bob Weir’s “Money Money” to that list too.

Tellingly, little of From The Mars Hotel has lived in on the band’s legendary live shows. “China Doll” is a noticeable exception (you’ll find several live versions that sound better than the original studio version) and “Ship of Fools” and “Scarlet Begonias” are classics in the live canon, but the rest of the record has rightly been boarded up in the attic of their life. If Garcia and Weir had indeed grown tired of writing the same old songs over and over, at least it created an opportunity for Phil Lesh to fill the gaps with two of the album’s biggest surprises, “Unbroken Chain” and “Pride of Cucamonga.” The first fuses multiple parts together (similar to the subsequent “Terrapin Station”) and introduces the synthesizer (courtesy of Ned Lagin) to create a very different but exciting musical stew from the Dead’s current members. The second is a hiccupy cowboy song that would have been a perfect fit for New Riders of the Purple Sage.

There are people who will tell you this is a great album, maybe even their favorite album by the Dead. In those cases, I can only imagine it was one of the first Dead albums they ever owned, and the discoveries most of us made on American Beauty or Workingman’s Dead were instead made here. Viewed against their larger body of work, From The Mars Hotel is a nice place to visit, but you wouldn’t want to live on a desert island with this as your only Dead disc. In fact, the whole living-on-a-desert-island thing is probably just a bad idea.