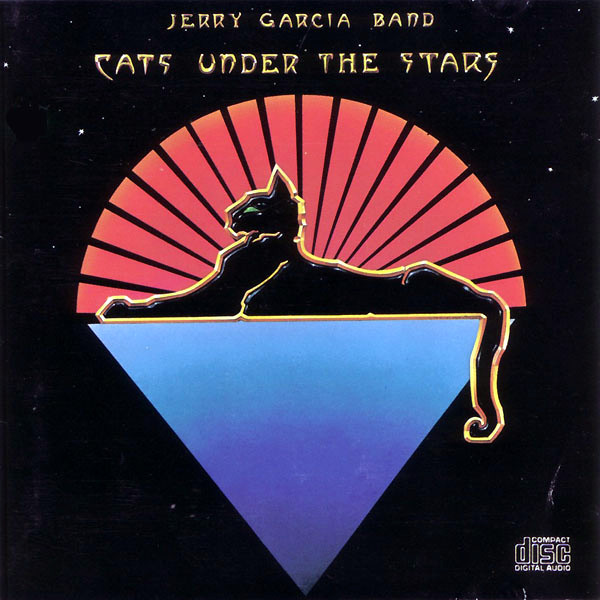 Somewhere between Terrapin Station and Shakedown Street, Jerry Garcia and the Godchauxes found time to release a new album of material as the Jerry Garcia Band. Rounded out by some of Jerry’s regular sidemen (John Kahn, Merl Saunders, Ron Tutt) and featuring lyrics by Robert Hunter, Cats Under The Stars sounds a lot like those two Dead albums distilled down to their Garcia/Hunter and Godchaux songs.  It’s not on a par with the last Dead album, and may be at least partly responsible for the subpar Shakedown (to which Garcia contributed only three new tracks), but it’s still a solid addition to the Dead’s Arista output (a period not synonymous with the band’s best work, lest you take that as a hearty endorsement).

As for me, my heart tends to light up a little when I see the words Jerry Garcia and Robert Hunter together, since the pair have been the source of much joy. “Rubin And Cherise,” “Gomorrah” and “Cats Under The Stars,” I’m happy to say, are right in line with what you’d expect from the Dead’s most enduring songwriting partnership. Although the album is a little light at eight tracks (including the short instrumental piece, “Down Home”), it makes up for it some with variety. The Kahn/Hunter reggae song, “Love In The Afternoon,” is one such surprise, Donna’s pretty pop song, “Rain,” another, and the airy “Palm Sunday” reveals that even Garcia and Hunter can still surprise us after all these years.

Without a proper producer, the arrangements occasionally unravel (Run For The Roses, by contrast, felt overproduced), and you won’t find the same piquant instrumental interplay on Stars that you do with the Dead. On your way from the station to the street, however, there’s no harm done if you look this one up.