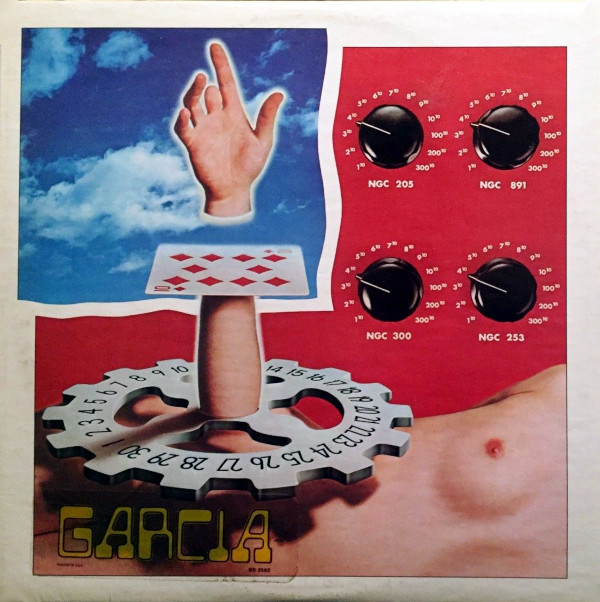 Jerry’s first true solo album is the real deal, not to mention all the other great songs that have since been rolled into the Dead’s show.

If you enjoy the Garcia/Hunter compositions from this period, you’re in for a wheel treat. His first album (casually called The Wheel to distinguish it from his other eponymous album) features a handful of classic songs that have comfortably insinuated themselves into the Deadshow over the years: “Deal,” “Loser,” “Sugaree,” “To Lay Me Down,” “Bird Song.” Together with the complete contents of Workingman’s Dead and American Beauty, they rank with some of the best songs to come from the Dead.

Despite its strong resemblance to the Dead, this is a true solo project: Garcia plays everything but drums (provided by the brilliant, underrated Billy Kreutzmann). The Wheel is also notable for the extended sound collage on side two, which suggests a psychedelic amalgam of The Beatles (“Revolution No. 9”), Hooteroll? and Pink Floyd. The brief instrumental, “An Odd Little Place,” is just a postlude to the previous song, while the mellow, tuneful title track showcases Jerry’s pedal steel to good effect.

Fans of Workingman’s Dead and American Beauty (which I’m pretty sure is everyone) will find plenty of the same magic here. As songwriting partners, Garcia and Hunter had few peers. “Deal” and “Loser” use cards as a metaphor for life, “Bird Song” finds Hunter again beguiled by beauty, “To Lay Me Down” is a worthy candidate for the last-song-before-I-die list. Playing everything himself, Garcia doesn’t strike upon the same clever interplay as his bandmates (e.g., the bass guitar is pretty basic), but he does a remarkable job of approximating the feel of the Dead on his lonesome. In fact, The Wheel makes a compelling case that Garcia’s most sympathetic collaborator is himself.

(Originally, all selections were credited to Jerry Garcia, Robert Hunter and Billy Kreutzmann.)

The Pictures
Cover photo and album design by Bob Seidemann.