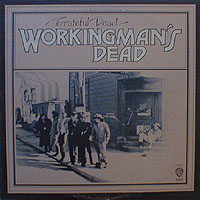 The psychedelic acid test of Anthem and Aoxomoxoa was over. The Dead entered the studio to make an American country/blues album that echoed the recent work of Bob Dylan, The Byrds and, in its rich vocal harmonies, CS&N. The music on Workingman’s Dead, like its subdued sepia-toned cover, seemed a calculated contrast to the flashy excess of the past. Where once the band had been counterculture revellers, they now appeared to pay court to the American musical traditions of country, blues and the cowboy mythology. Robert Hunter’s lyrics drew from a rich American mythos of crows, dire wolves and runaway trains, with death a constant companion. Jerry Garcia gave a prominent place to the pedal steel guitar on songs like “Dire Wolf” and “High Time.” The songs offered complex musical interplay behind a folksy persona that was friendly and familiar; listeners dropped their guard and discovered that the Dead were breathing new life into their beloved country. Workingman’s Dead quickly became their best-selling record and set the stage for just about every Dead album after. “Uncle John’s Band,” “Dire Wolf” and “Casey Jones” are indelibly written in the great American songbook, and even songs like “Black Peter” and “New Speedway Boogie” feel like they’ve been with us from the beginning. Scratch the surface of these songs, however, and you’ll find the old spirit of subversion at work, as though the Dead (like Dylan before them) were picking and playing and winking at us all at once. More of that shone through on American Beauty, which in some ways made Workingman’s Dead sound like a dry run of that album. Both works are absolutely essential works that distill the Dead’s appeal into its purest studio essence, though on stage they burned purer still.

All songs written by Robert Hunter/Jerry Garcia unless noted