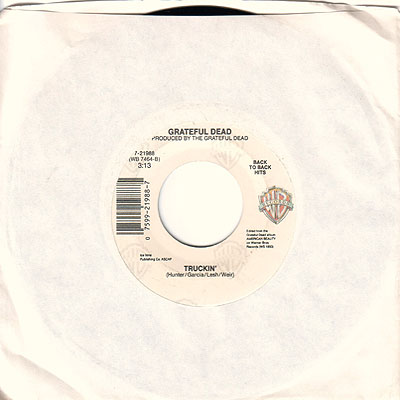 The fun thing about the Dead is that, the deeper you dig, the more you discover. Take “Truckin’” as an example. This song has been subject to so much speculation on the part of listeners, some of it founded (the reference to New Orleans is obviously about that year’s drug bust, the title is inspired by R. Crumb’s Keep On Truckin’ cartoon) and some of it not (Is Vitamin C really a reference to acid? Is Sweet Jane a nomme de tomb for Janis Joplin? Does “soft machine” refer to Burroughs’ book, a Dallas club or something else?). Whatever your conspiracy theories, there’s no denying the song is an allegory in which we’re encouraged to get through life one day/city at a time. Originally released on American Beauty, “Truckin’” was edited, apparently remixed and released as a single at the beginning of 1971. Although it only reached as high as #64, “Truckin’” had the distinction of being the band’s highest-charting single for years (until “Touch of Grey” eclipsed it). It remains one of the band’s most identifiable songs, and the line “what a long, strange trip it’s been” has become something of a motto for the Dead and their fans over the years. The original B side, “Ripple,” is also from American Beauty.