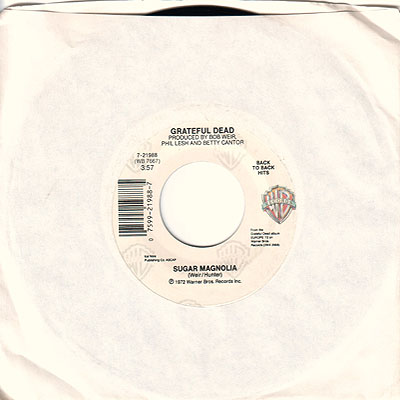 Believe it or not, this song wasn’t released as a single until a live version was excised from the Europe ’72 set.

This is the token single from the triple-disc Europe ’72 package, here trimmed down to a meagre four minutes. “Sugar Magnolia” has always been one of my favorites from Bob Weir, painting the picture (through Robert Hunter’s lyrics) of the ideal, down-to-earth woman: in tune with nature, supportive of her man (I didn’t say it was your ideal). The natural imagery from Hunter is really beautiful, focusing primarily on water, flowers and light. Although the song is purportedly about Weir’s girlfriend at the time (Frankie Azzarra/Hart/Weir), it appears Hunter may have taken some poetic license in casting the former go-go dancer as a woodland nymph. The B side on the original single is the live version of “Mr. Charlie” that appeared on Europe ’72 (right after “Sugar Magnolia,” in fact).