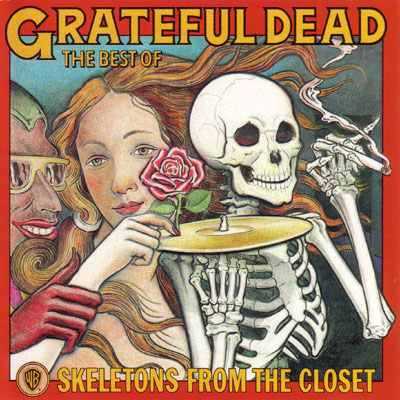 The Grateful Dead’s gratest hits which, for a band that had only one hit, was a very bad idea.

What’s so great about Grateful Dead? Well, for starters, “The Golden Road (To Unlimited Devotion).” Oh, and let’s not forget “Rosemary,” “Mexicali Blues” (which isn’t even a Grateful Dead song) and the six-minute live version of “Turn On Your Love Light” that Warner Brothers lazily tacked on to the end of The Big Ball (a budget-priced, double-elpee sampler from the 70s). No wonder Deadheads don’t like this album.

Skeletons’ shortcomings still didn’t stop three million Americans from buying it, although I’m guessing it stopped most of them from buying any Grateful Dead album after that. If you’re between the ages of 18 and 80 and own (or have access to) a radio, you’ve already heard the best that Skeletons has to offer. Better to spend your time/money/salable organs on Workingman’s Dead or American Beauty (which, together, form the better half of this Best Of). You can even buy Aoxomoxoa if you want, with my personal assurance that “Rosemary” is one of the worst songs on it.

The thing about the Dead is that you can’t distill them down to 10 songs or one album or one show. And if you were going to try to distill them down to 10 songs anyway, you’d probably want to make sure that five of them didn’t suck. Which would make you a more careful caretaker of their legacy than Warner Brothers, who were simply looking to cash out now that the band was managing their own affairs with Grateful Dead Records. I would tell you this is the worst “best of” album I own, but then I’d first have to burn, bury or sell both Changesonebowie and Changestwobowie, which is more effort than they’re worth.

The Players
Edited by Betty Cantor and Bill Wolf.

The Pictures
Cover artwork by John Van Hamersveld; art direction by Bob Seideman. The characters on the back cover portrait are apparently Marlon Brando, Jesus and Cesar Romero (and that’s supposed to be Buckminster Fuller sitting in the car behind them).