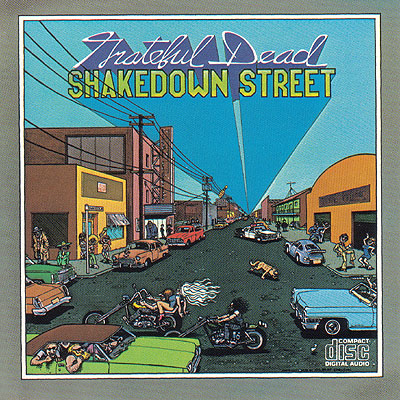 One of their least interesting avenues, although that didn’t stop it from going gold and generating a pair of hits.

This is the band’s infamous disco album, only it really isn’t. There’s just the one disco song on here (“Shakedown Street”), and it’s not so different from the disco-informed experiments of Terrapin Station (“Dancin’ In The Streets”) or Go To Heaven (“Feel Like A Stranger”). Honestly, other than the new digs and the white ghost (Lowell George) in the producer’s chair, this is their last album all over again without the suite terrapin. Mind you, that’s not exactly an endorsement; Shakedown Street is in many ways one of their worst studio albums. The songs that sounded great in the studio (“France,” “Shakedown Street”) didn’t work on stage, and the songs that sounded great on the stage (“All New Minglewood Blues,” “Fire On The Mountain,” “I Need A Miracle”) didn’t work in the studio.

The album also marks the end of the Godchaux era, and at least Donna gets the classy exit she deserves on “France” and “From The Heart of Me.” (Keith, I suspect, had checked out a while ago.) It’s not a case of Shakedown Street being a bad album, since the songs are individually good, but therein lies the problem. This feels like the work of individual artists (Weir, Garcia, Mickey Hart and Donna Jean) collectively packaged.

Both Cats Under The Stars and Heaven Help The Fool had a few good ideas, and Shakedown has its handful. In 2006, Rhino issued an HDCD remaster that featured much-improved sound and several bonus tracks, including a version of “Good Lovin’” with a surprisingly lucid Lowell George on lead vocals and four songs from their 1978 Egyptian concert that features a cool Drums segment recorded with Hamza El Din titled “Ollin Arageed,” in which I’m pretty sure I can hear the word “marijuana” being chanted. Or maybe it’s “Beware Obama,” since the Dead affect impressionable minds differently.