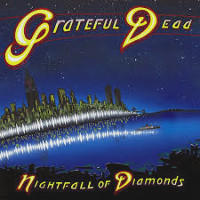 Kronomyth x.x: GIANT’S TEDIUM. You’re getting half a review out of me this morning, ass I’ve butt only heard the second of this two-disc set. Initially, I was annoyed that the first disc was in absentia, but it seems someone may have actually done me a kindness, as it was all I could do to get through the half I had. Nightfall of Diamonds is yet another in the neverending series of official archival Dead concert recordings, this time captured at the Meadowlands Arena on October 16, 1989. Recorded shortly before the release of Built To Last, this concert previews a few tracks from the Dead’s final studio album: “Picasso Moon,” “Built To Last” and “I Will Take You Home.” The band’s live appearances at the end of their career were hit or miss; Dylan & The Dead was terrible, Without A Net was actually very good. They definitely needed a net on this night, as the band is falling-down awful on most of these songs. The jams meander aimlessly and sometimes tunelessly, their voices are shot and they forget the lyrics on more than a few occasions. When they sing “How does the song go?” from Uncle John’s Band, it’s art imitating life. Of course, nobody but Deadheads buy these albums anyway, and for their trouble they’ll get a handful of keepsakes like the ancient encore “We Bid You Goodnight,” a creaky “Attics of My Life,” a great “Space” jam and yet another version of “Dark Star” to add to their collection. In the time it took you to read this review, however, they’ve probably issued at least two more archival concert releases, both of which are likely to be better than this one.

The Plastic
Recorded on October 16, 1989 in Meadowlands Arena, East Rutherford, New Jersey and released on 2CD on September 25, 2001 in the US (Grateful Dead, GDCD4081). Cover design by Randy Tuten, photography by Jim Anderson and Robert Minkin, package design by Robert Minkin Design.