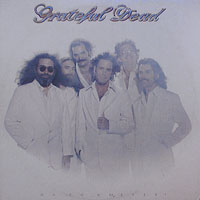 Kronomyth 17.0: FAIR TO MYDLAND. This is the most disappointing Grateful Dead studio album to date and it’s still not half bad. Produced by Gary Lyons (Wet Willie, Aerosmith), Go To Heaven featured an actual hit single in “Alabama Getaway,” which became their highest charting single since “Truckin’.” The album is also notable for the introduction of keyboardist Brent Mydland into the band, who effectively replaced both Donna Jean and Keith Godchaux. Mydland contributes two songs to Heaven, “Far From Me” and “Easy To Love You,” and sings them with a pleasant voice suggestive of Eagles and other West Coast Top 40 bands. The most interesting aspect of Heaven, in my opinion, is Bob Weir’s continued exploration into minor-key jazz-pop. Like “Shade of Grey” (from Weir’s Heaven Help The Fool), both “Lost Sailor” and “Saint of Circumstance” are the kind of songs you expect to encounter on a Joni Mitchell or Steely Dan album rather than the Dead. Mydland adjusts to the change well, but the rest of Dead sound a little lost in Bob Weir’s blue ocean. Over the years, a little slice of Heaven has made it into the wider live Dead repertoire, including “Saint of Circumstance,” “Althea” (one of my favorites on this record) and “Feel Like A Stranger” (which appears here as a herky-jerky disco song). As with their last two albums, the Dead also dredge up an old concert favorite, “Don’t Ease Me In,” and manage to suck all the fun out of it in the studio. Despite a few bright moments, Heaven is the Dead album I go to least often. The songs themselves are fine as individual achievements for Garcia, Weir and Mydland, but the collective energy isn’t there and Garcia’s new Tiger is far too tame on this album.