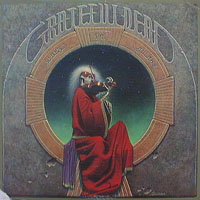 Kronomyth 13.0: ALLAHLUJAH. In one of life’s little ironies, the Dead’s temporary retirement from touring resulted in a studio album that finally sounded like a Dead concert, Blues For Allah. Then again, maybe it wasn’t ironic at all, since (like lightning) that energy had to go somewhere. The first half of the album is constructed as a seamless performance of new songs connected by instrumentals like “King Solomon’s Marbles” and “Stronger Than Dirt Or Milkin’ The Turkey.” These are simply names given to the nameless, organic interplay that arose during the band’s musical communion on stage (e.g., Drums, Space). The first three tracks also constitute a kind of musical tangram, where “Help On The Way” introduces a musical problem that gets extrapolated and a bit complicated on “Slipknot!,” only to find its perfect resolution in “Franklin’s Tower.” After the drum/space interlude, Bob Weir steps up to the mic for one of the strongest Weir/Barlow songs this side of In The Dark, “The Music Never Stopped.” The second side unravels a bit, as Garcia and Weir present what are essentially solo songs (albeit very good ones) before the band closes with a tripped-out tribute to the late King Faisal  that calls for peace between the Arabs and the Jews. In a sense, Blues For Allah is a perfect miniature Dead concert: the harmonies are flawless and the intricately articulated guitar of Garcia (who was now playing in a distinctively piquant style on what I believe was a Travis Bean electric guitar at this point) supports his standing as one of rock’s truly great guitarists (Rolling Stone recently ranked him #46 behind Stephen Stills and Radiohead’s Jonny Greenwood, which is why I don’t number anything.) This album is also notable for its pronounced jazz fusion influence. Keith Godchaux, who rarely gets much recognition for his musical contributions to the Dead, rises to the challenge with a variety of keyboards, including the Fender Rhodes and, on “Crazy Fingers,” what sounds to be an organ. A perennial favorite among Deadheads (and rightly so), Blues For Allah and the subsequent Terrapin Station best capture the band’s live lightning in a bottle, and may also be the two Dead albums that most appeal to progressive rock/fusion fans.