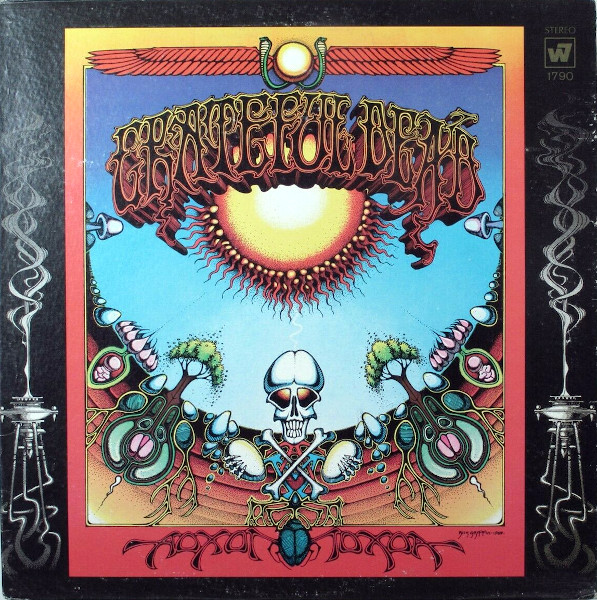 Featuring the lyrics of Robert Hunter, Aoxomoxoa is the band’s most accessible and succinct album to date.

Aoxomoxoa marks the beginning of the band’s best music, including such perennial favorites as “St. Stephen,” “China Cat Sunflower” and (my own personal favorite) “Dupree’s Diamond Blues.” Much of the credit belongs to new lyricist Robert Hunter, whose pithy observations would help to define the Grateful Dead. And yet, the psychedelic touches are still too pronounced, too precious on Aoxomoxoa, diluting what would otherwise be a nearly perfect album.

Specifically, Jerry Garcia as cosmic cantor on “What’s Become of the Baby” is exactly the sort of song that CD makers had in mind when they invented the skip button. That freakshow and “Rosemary” would sink a lesser album. Fortunately, Aoxomoxoa is buoyed by tracks like “Doin’ That Rag” and “Cosmic Charlie.” Even the brittle “Mountains of the Moon” makes for a pretty musical box. I tend to listen to the first side of this record and leave the second side alone (if I could swap “Cosmic Charlie” with “Rosemary” I might never flip it over at all).

Despite the frequent criticism that the Dead sounded confined in the studio, Aoxomoxoa isn’t confined by anything but the occasional lapse in judgment. The intricacies in the arrangements shine through, the playing is lively and the interplay organic enough. It is the closest thing to a psychedelic pop album that the band has made, at times sounding like an American version of The Kinks. It’s also the last studio album to feature the (musically) experimentally minded Tom Constanten, whose exotic instrumentation (harpsichord, electronic tapes) would have seemed strangely out of place on the earthier, folkier Workingman’s Dead and American Beauty.

A1. St. Stephen (Jerry Garcia/Robert Hunter/Phil Lesh)
A2. Dupree’s Diamond Blues
A3. Rosemary
A4. Doin’ That Rag
A5. Mountains of The Moon
B1. China Cat Sunflower
B2. What’s Become of The Baby
B3. Cosmic Charlie

All songs written by Jerry Garcia/Robert Hunter unless noted.

The awesome album cover illustration (one of my all-time favorites) is by Rick Griffin, a popular psychedelic poster artist at the time.