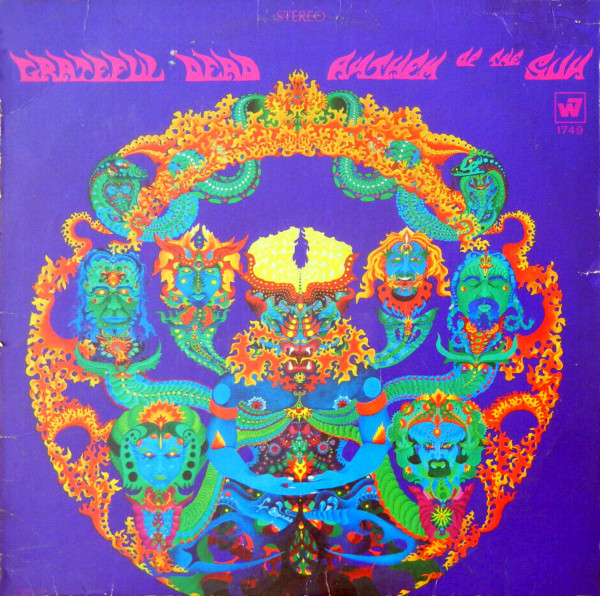 Like the Airplane before them, the Grateful Dead abandoned short-form songs after one album and began making more experimental, trippy music. Anthem of the Sun is the first album that attempts to bring the band’s extended, improvisational approach of their stageshow into the studio. Although the band still had a few kinks to work out as they sought to blend everything together, they were clearly on the right path; the golden road, it turned out, had been a shortcut to nowhere. Here you’ll find the sneaky, minor-key melodies wrapped in deep, mystical packages (“That’s It For The Other One,” “Alligator”), psychedelic sound collages and double drum solos that would become synonymous with the Dead.

Like the acid tests of Ken Kesey, the Grateful Dead (and the Airplane) were going further into their own cosmic consciousness through music, ignoring boundaries, embracing everything in complete non-judgment. They would get better at filtering the accidental from the experimental with time, but Anthem of the Sun is in many ways a new dawning of the Dead. The album is experienced in three large sections: the first side of music, featuring songs encased in their own self-contained universe, and two extended songs/jams on side two. The effect is listener immersion; time becomes relative, it passes too quickly and as the last traces of “Caution” disappear we find ourselves back in a cold and empty world.

The Dead were beginning to bend time and space with their music, which is something very unique to them. While Anthem does represent the beginning of the “classic” Dead period, it is a different chapter than American Beauty and beyond. The keyboards never really find a home in the arrangements, and the polyrhythmic explorations of Mickey Hart had yet to blossom. Their next album, Aoxomoxoa, would distill the songs and experiments, which made for a more accessible album but also a less cohesive experience. In many ways, Anthem of the Sun is as close as the band has come to making a live studio album, which makes it a fan favorite even 50 years on.

A1. That’s It For The Other One
1. Cryptical Envelopment
2. Quadlibet For Tender Feet
3. The Faster We Go, The Rounder We Get
4. We Leave The Castle
A2. New Potato Caboose
A3. Born Cross-Eyed
B1. Alligator
B2. Caution (Do Not Stop On Tracks)

All selections written by The Grateful Dead.