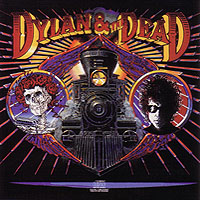 A tantalizing tag team to be sure, starring Dylan as the cranky saboteur and The Dead as his deferential backing band. We know the bard to be a creature of whimsy, enigmatic in his offhand performances of the old standards, but I had hoped that the Dead would rouse Dylan from sleepwalking through these once-green fields. Speculating that the singer couldn’t mind his wheel is nonsense, since I saw Dylan perform around this time and it was smooth sailing from beginning to end, but it was a mercurial wind that prevailed on this live outing with The Dead. The substance was there for greatness, but likely so was the substance abuse for failure. The Dead provide some pungent touches to Dylan’s music, as did The Rolling Thunder Revue (whom I’d give the nod here). The real albatross is Dylan’s voice, slurring through the words with all the conviction of a street bum, lumbering in a jagged line with the Dead at a reverential distance careful not to lap the leader. While the performance of “Joey” is easily dismissed, it did get me running to Desire again, and I’m thankful for that. But sitting through this is largely a thankless task for both factions. It does right itself some at the end with a lively version of “All Along The Watchtower” and the intriguing “Knockin’ On Heaven’s Door” (where Garcia had earlier knocked on Run For The Roses). Whether that’s enough of a carrot depends on how hungry you are. No doubt seeing Dylan and The Dead share a stage was worth the price of admission, but as an audio-only experience this is less than compelling. Dylan & The Dead isn’t awful, but relative to the talent in attendance (physically if not mentally) this live disc is a major disappointment.

All songs written by Bob Dylan unless noted.