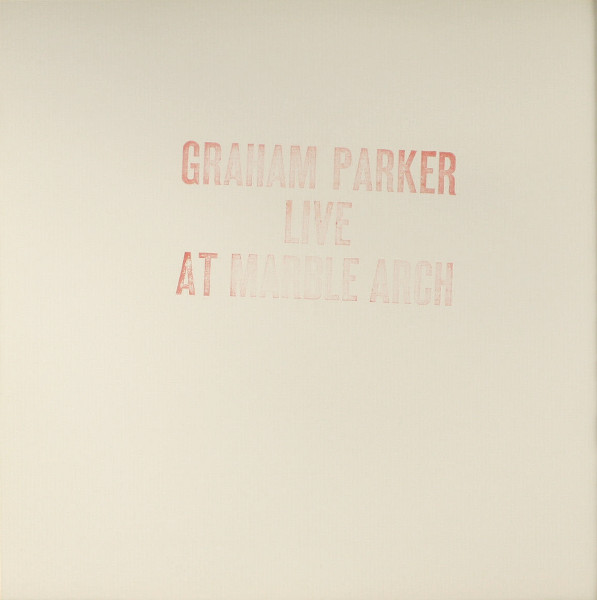 This promotional elpee captures the fresh energy of Graham Parker and the Rumour flush with their first success.

Graham Parker’s label released a promotional live record in between his first and second albums, recorded in front of small audience of insiders. Live at Marble Arch features five tracks from his first elpee, Howlin Wind, two from the upcoming Heat Treatment and a few covers of the R&B/soul music that inspired him. For a promo elpee, it’s a remarkably clean-sounding record (Nick Lowe is credited as producer) and the performance is predictably excellent.

The performances of White Honey, Back to Schooldays, Silly Thing, Don’t Ask Me Questions and Soul Shoes match the energy and intensity of the originals. In fact, I think I like these versions of “White Honey” and “Silly Thing” even more than the originals. The two new tracks from Heat Treatment are also terrific: That’s What They All Say and Back Door Love. As for the covers, Parker does a fine job on Chain of Fools and I’ve never heard a bad version of You Can’t Hurry Love. The encore performance of Little Richard’s Kansas City (who Parker introduces as a “screaming nutcase from America”) is the lone miss; they had about ten years to figure out how to out-rock The Beatles and didn’t.

You can find a used copy of Live at Marble Arch for around twenty bucks, which is a bargain in my book. Given how lame The Parkerilla turned out to be, this is the definitive early Parker live album by default. Mercury knew that had something special with Graham Parker and the Rumour, and you can forgive them their excitement in releasing three Parker albums in the span of one year. At least this one wasn’t purely motivated by profit, although it is a smart bit of promotion.

Released as promotional elpee in July 1976 in the UK (Phonogram, GP1).