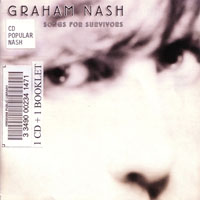 Solo albums from Graham Nash and David Crosby are as infrequent as Haley’s Comet sightings these days, and no doubt many observers put their telescopes away after Innocent Eyes. It was something of a surprise then that Graham returned to the studio after CSN&Y’s Looking Forward to work on an album of new material. Released almost two years after the fact on independent Artemis Records, Songs For Survivors finds the UK contingent of CS&N alive and well. Pristinely recorded (the liner notes go to the trouble of listing each individual microphone) and produced with father-and-son Russell and Nathaniel Kunkel, Nash’s first new solo album in 16 years is a warm and well-crafted collection of original songs featuring acoustic guitar, harmonica and that seemingly ageless voice. The album is a nod to his past (Songs For Beginners), a tip of the hat to fallen comrades (George Harrison, Cass Elliott, Michael Hedges and writer Allan MacDougall) and a concession to the challenge of simply surviving in this mad, modern age. “The Chelsea Hotel,” “Lost Another One” and “Liar’s Nightmare” address those issues directly, while love songs fill the gaps. Also included is a cover of Richard and Linda Thompson’s “Pavanne” (from First Light), smartly done and smacking of woodsmoked folk. Nash was never the most politically pointed of CSN&Y, yet with age has come a certain amount of crustiness, evidenced by a barbed opening pair in “Dirty Little Secret” (about the 1921 Oklahoma race riots, I have no idea why) and “Blizzard of Lies” (drug abuse). Taking into account that “Nothing in the World” is a (probably unconscious) rewrite of The Beatles’ “Don’t Let Me Down,” Songs For Survivors shakes out to eight new tracks in 16 years; not enough to suggest a second wind. In fact, we’re still waiting for an encore. However, it’s a markedly better record than his last two, a graceful graying that shares the quality and integrity of recent CS&N albums like After The Storm and Looking Forward.

All songs written by Graham Nash unless noted