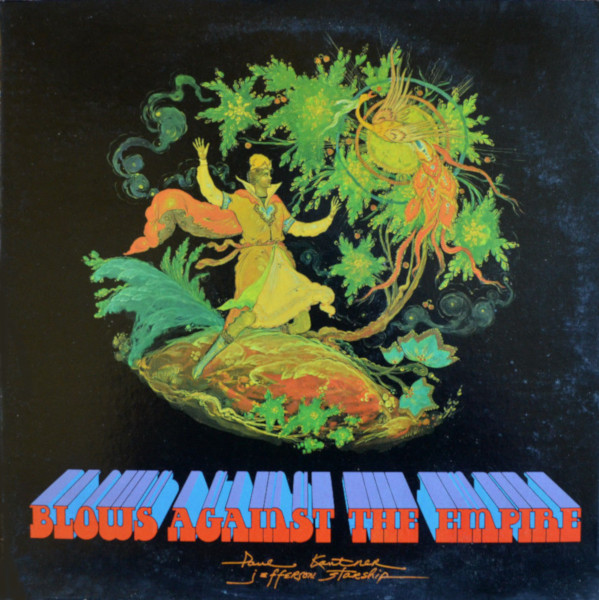 Kronomyth 1.0: The mothership of all sci-fi concept albums.

Jefferson Airplane took some time off to refuel after Volunteers. Paul Kantner and Grace Slick used the break to release a revolutionary science fiction concept album, Blows Against The Empire. Featuring cameos from various Airplane members, David Crosby, Graham Nash and three-fifths of the Grateful Dead, Blows was an all-star interstellar trip that suggested “The House at Pooneil Corner” on a grander cosmic scale.

Kanter and Slick were expecting their first child, an event plainly referenced on “A Child Is Coming,” and the idea of a new generation of revolutionaries seems to have inspired Kantner to write his own musical manifesto for the future. Blows is a brilliant album, even as it’s an overblown middle finger to the establishment much of the time. The transition from the opening call to arms, “Mau Mau (Amerikon),” to the disarming “The Baby Tree,” is genius. In those two songs, Kantner manages to paint a vivid new Utopia and then poke holes in his own Utopia moments later. Slick provides an equally brilliant brushstroke with the beautiful distortion of “Sunrise,” a song that anticipates the alien soundscapes of prog electronica by several years.

Blows will feel familiar to anyone who has waded through Kantner’s recent works. “Lets Go Together” isn’t different in spirit than “We Can Be Together” and makes a reference to “wooden ships” in the lyrics. But there’s the sense on this album that Kantner is finally free to make the kind of music he wanted to; when he sings on “Hijack” that “People with a clever plan can assume the role of the mighty and hijack the starship,” he might as well be singing about himself. As the culmination of Kanter’s science fiction short stories into a longer conceptual work, Airplane riders will definitely want to check this one out. Despite charting well on its release, Blows Against The Empire didn’t contain a hit single, and so the album has faded from memory over the years. It is well worth a dusting off, particularly if you’re still carrying a torch for the Airplane’s pop polemics.