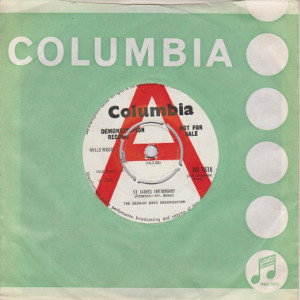 One of the last singles from the Organization, recorded after Jack Bruce had been fired from the band.

Kronomyth 2.1: And so, being young and dipt in folly, I fell in love with melancholy.

Only in the strange world of Graham Bond could this glum tale, in which a lost love has clearly crossed the Lethian divide, be re-cast as a plea for a lover’s return. Arranged by Ginger Baker, “St. James Infirmary” could be described as a playful dirge, as incongruous as that seems. It delivers on what you’d expect from the Organisation (passionate vocals, powerful playing), though it’s an odd choice for a single, and may have simply been a case of Columbia cashing in before the whole band skipped Bond.

The B side in the UK, “Soul Tango,” is actually a tango; mumbled and muddled and stilted and hobbled, but still a tango. In the US, the earlier A side “Wade In The Water” was pressed into service as the flip. The UK single was later appended to the expanded version of Bond’s Love Is The Law. Oh, and in my travels through the Internet in search of the original authors for “Wade In The Water,” I came across this treasure trove of 45 rpm singles and fond remembrances, So Many Records, So Little Time. Surely, you have a little time to check it out.

*A pseudonym for Irving Mills.