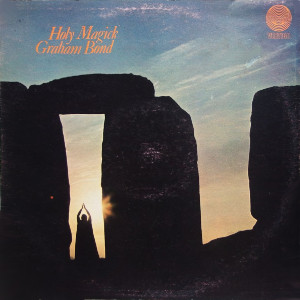 Bond’s deepest dive yet into the mystic arts, featuring a magic ritual set to music and songs about The Tarot.

Love Is The Law was Evil Bond on a budget. Holy Magick is Evil Bond with a full band. The result sounds like Gong infiltrated by a Satanist cabal or Ginger Baker’s Air Force working for darker forces.

At this stage in his life, Graham Bond was a better candidate for the looney bin than the record bin. I find it amazing that Bond could get a legitimate label (Mercury) and professional musicians (Rick Grech, Alex Dmochowski, Victor Brox) to tag along for his descent into madness. (In an odd twist, Brox appeared that same year as Caiaphas in Jesus Christ Superstar.)

If you can ignore the fact that “Holy Magick Suite” is a Satanic ritual set to music, you might see it as an interesting continuation of Bond’s unique progressive blues/rock/jazz style. But you won’t be able to ignore that fact, because the whole purpose of this music is to usher in a new Age of Aquarius. Bond calls upon the dark angels of light, invokes the Qabalistic cross and perverts pieces of Christian liturgy (the suite closes with Christ’s final words, “It is finished”) in what must constitute some of the most profane music ever committed to vinyl.

Side two features shorter songs that have a connection to the Tarot. “Return of Arthur” deals with Arthurian legend and the prophecy that Arthur will return as England’s savior. “The Magician” is actually something of a love song from Bond to Stewart and is not only the best track on here, but the only one that can be safely excised from the album’s Aquarian theme (that is, it works on two levels). The final two tracks are written by Diane Stewart and, while neither could be considered musically adventurous, they’re not bad, just a bit bland as invocations of evil go.

I remember thinking holy crap the first time I heard this album—not because I was amazed, but because it was quasi-religious crap that, as a Christian, I found naturally offensive. I wish it had been otherwise with Bond; the man was supremely talented, but fundamentally tainted. Unable to separate his music from his mental and spiritual deterioration, I would pronounce Holy Magick one of the most depressing records on record.