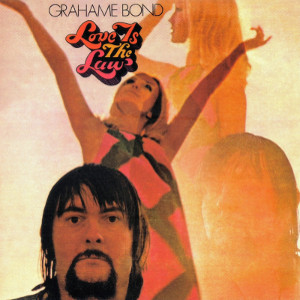 The first of two albums that Bond recorded in America for Pulstar Records, by witch time Bond had gone full warlock.

The story of Graham(e) Bond takes a decidedly dark turn after the demise of the Organisation. Goaded on by the dual demons of drugs and the particular madness that plagues all of us in one measure or another, Bond arrived at the conclusion that he was the illegitimate son of Aleister Crowley (a very debatable though not impossible claim) and began assuming the role of the bastard prince of darkness. The British record industry turned its back on Bond (admittedly, there existed a limited market for an overweight warlock) and so he moved to California to record his next album, Love Is The Law (so named for Crowley’s Law of Thelema).

Recorded with drummer Hal Blaine and what I’m guessing is future wife Diane Stewart on vocals (don’t quote me on that), the record largely picks up where Bond left off, with scorching organ-based blues/jazz/rock songs such as “Strange Times, Sad Times,” “Moving Towards The Light” and “Our Love Will Come Shining Through” (which was written several years earlier). Despite some excellent performances from Bond and Blaine under what one suspects were less than ideal conditions, the material gets noticeably thin after the first few tracks. (“Crossroads of Time,” for example, is a mishmash of borrowed classical themes, “Hit The Road Jack” and summer of love sloganeering.) A handful of instrumentals attempt to fill the gaps, a doomed venture with only two musicians.

Bond’s voice and vision remain unique, and he had few peers on the Hammond organ. You’ll hear that on this album, especially in the beginning. You’ll also witness the beginning of the Graham Bond Deterioration, as he struggles to channel those talents into consistently good music for thirty minutes. The Sound of 65 was a revelation. Love Is The Law is the revelation unravelling. Bond fans should get around to hearing this and the Magick albums eventually, but I’d point you to Solid Bond or Ginger Baker’s Air Force first. The expanded compact disc reissue is a bad match, adding early singles that now give you the before and after of a good thing.

“Do what thou wilt shall be the whole of the Law. Love is the law, love under will.” – The Law of Thelema.