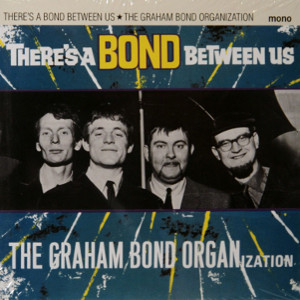 Their second album for Columbia in less than a year features more of the same, but with less impressive material.

Graham and the band returned to the studio quickly to record a second album. Too quickly, apparently, since There’s A Bond Between Us is a pale imitation of the first. Where the The Sound of 65 was downright sinister-sounding in spots, a good half of TABBU is merely competent R&B played with no more and no less passion than Them or any other R-and-wanna-B act at the time.

The record does include two really interesting “pop” songs: Jack Bruce’s “Hear Me Calling Your Name” and Bond’s “Baby Can It Be True?,” a cross between Tom Jones and Dracula that features one of the earliest appearances of the mellotron. An exciting version of Ray Charles’ “What’d I Say?” and Ginger Baker’s exotic-sounding “Camels And Elephants” (which anticipates his Air Force by several years) are also highlights. But there was something about hearing Bond sing “Hoochie Coochie Man” that set your hairs on end, while I’m pretty sure I actually yawned during the opening instrumental, “Who’s Afraid of Virginia Woolf?”

This would be the last official album from The Graham Bond ORGANisation, with a few singles following. (Those singles are appended to the 2009 remaster, and “You’ve Gotta Have Love Baby” from 1967 is an ear-opening experience.) The organization had a world of talent (Dick Heckstall-Smith might have been the best horn player in a rock band at the time), they just didn’t have a clear roadmap. There’s A Bond Between Us will appeal to completists and Cream aficionados I suppose (who share a similar supply chain problem), but I’d definitely start out with their first.

A1. Who’s Afraid of Virginia Woolf? (Don Kirkpatrick/Keith Knox)
A2. Hear Me Calling Your Name (Jack Bruce)
A3. The Night Time Is The Right Time (Lew Herman)
A4. Walkin’ In The Park (Graham Bond)
A5. Last Night (The Mar-Keys)
A6. Baby Can It Be True? (Graham Bond)
B1. What’d I Say? (Ray Charles)
B2. Dick’s Instrumental (Dick Heckstall-Smith)
B3. Don’t Let Go (Jesse Stone)
B4. Keep A’Drivin’ (Chuck Willis)
B5. Have You Ever Loved A Woman? (Graham Bond)
B6. Camels And Elephants (“Ginger” Baker)