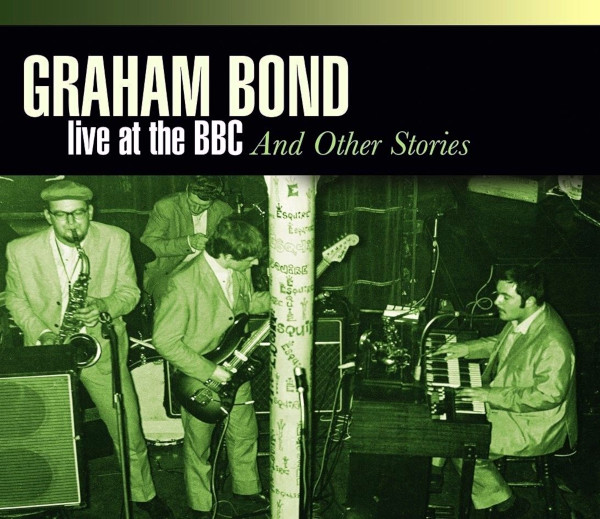 This is a four-disc set of various live performances featuring Graham Bond, dating from 1962 to 1972. During that decade, Bond morphed from competent alto sax player to organ-playing fiend, so the performances are predictably all over the place in terms of style and sound quality. As an historical document, Live at the BBC and Other Stories chronicles an important career in music. As a collection of new music, however, this isn’t the place to start if you’re interested in the story of Graham Bond. For that, you’d want to start with The Sound of 65, maybe snag There’s A Bond Between Us to fill in a few missing pieces and possibly pick up one of his weird occult albums like Love Is The Law or Holy Magick, since reading about them isn’t nearly as interesting as hearing them.

Of what’s included on this set, the opening BBC concerts from 1963 are likely to be the most interesting to fans, as they feature the Organisation with John McLaughlin on guitar. McLaughlin left the band before they recorded their first album, so these recordings are the only surviving copies of a remarkable combo. The 1963 BBC shows also feature the earliest performances of “Spanish Blues” and “Wade In The Water.” The first disc closes with some terrific jazz from the Don Rendell Quintet featuring both Bond and Dick Heckstall-Smith, also recorded in 1963.

The second disc features various incarnations of the Bond band over a ten-year span, including his strange encounter with Cream lyricist Pete Brown. Disc three showcases two mini BBC concerts in 1970 as the Graham Bond Initiation, while disc four brings the story back to the beginning to Bond’s roots as a sax player. The recording quality is, not surprisingly, on the muddy side, although I’ve heard worse. As a catch-all compilation of live tidbits, Live at the BBC is a better investment than those single-concert Bond discs (e.g., Klooks Kleek). Most people can live completely satisfying lives without hearing any of this, but for those few of us who find Bond a fascinating figure, you’ll want the whole story.

“There are extravagant stories. Of John McLaughlin passing out on stage. As he slowly collapses, his rasping guitar emits squalls of feedback. Rather than offering help, Jack Bruce stands back, notating the sounds for future reference. On another occasion, in mid-set, it’s Jack who shorts his bass against the microphone, receiving a flash electric shock that stuns him. As the gig progresses they calmly pick him up and lay him out on top of Graham’s organ until he revives.” — a snippet from Andrew Darlington’s wonderful Graham Bond page from his site, Eight Miles Higher.