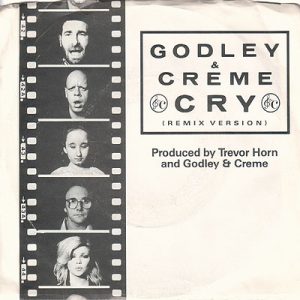 The remixed version of “Cry” became their biggest US hit, and a clever video featuring one of the first examples of “morphing” faces no doubt helped the succinct, catchy song make commercial inroads. The flip side, “Love Bombs,” is an excessive percussive excursion that will be familiar to anyone who’s heard Andy Partridge’s dub experiments (and lived to tell the tale). As to the different versions below, let me clarify: the “single remix version” (3:55) and “album remix version” (6:30) both appear on the G&C album, The History Mix Volume 1. The latter is thus often referred to as the “extended version,” but it’s simply the longer of the two “album” versions. The “12 remix version” is the real extended version (or what we’d typically call the “extended” version in these parts), clocking in at 7:25 and available only on the 12-inch singles. Zadelp?

The Players
Remixed by Nigel Gray.