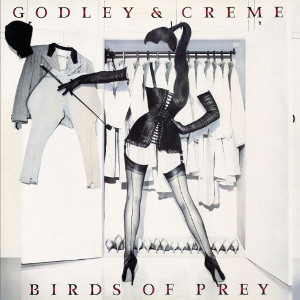 [Kronomyth 5.0]
Birds A Capella Stick Together.

I thought Snack Attack/Ismism was the best thing they’d done since Sheet Music, so the followup was bound to disappoint on some level. I think I’m more disappointed that Birds of Prey didn’t get an American release. The music of Godley and Creme is admittedly an acquired taste, but if Sparks could get an American distribution deal, I don’t know what the objection could have been to Kev and Lol. Their last album benefitted from two terrific songs, “Sale of the Century” and “Wedding Bells.” Nothing on Birds of Prey is so catchy. Instead, you get an immaculately produced album of mostly electronic pop played almost entirely by Godley and Creme (Guy Barker purportedly adds trumpet on “Save A Mountain For Me,” which seems odd since “Out In The Cold” is the only song with horns on it). Kev and Lol are DIY samurai; on the opening “My Body The Car,” they don’t even need instruments. Despite a sharp sense of humor (the bonus track, “Welcome To Breakfast Television” is hilarious), Godley and Creme have a dark side, and many of the songs on Birds of Prey are dark: jilted lovers, opportunists, dead horses and murderers figure prominently in the cast of characters. Their last album had some of that too (“Under Your Thumb,” “Lonnie”), but it also had sweetness and silliness to offset the darkness. Without those spoonfuls of sugar, Birds of Prey leaves a slightly bitter taste in my mouth. Of course, most of the G&C albums are difficult on some level, so fans of the pair’s perfectly produced pop-art aren’t as likely to mind. Ultimately, Birds of Prey is a few shamma lamma ding-dongs shy of their best work, though the sharp lyrics and occasionally catchy choruses are still the marks of taloned minds.

Original LP Version
A1. My Body The Car
A2. Worm And The Rattlesnake
A3. Cat’s Eyes
A4. Samson
A5. Save A Mountain For Me
B1. Madame Guillotine
B2. Woodwork
B3. Twisted Nerve
B4. Out In The Cold

All titles written and arranged by Godley and Creme.

The Pictures
Sleeve design and photography by Geoff Halpin.

The Plastic
Released on elpee and cassette in 1983 in the UK (Polydor, POLD/POLDC 5070) with lyrics innersleeve.