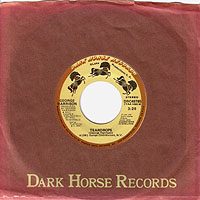 George was known as the spiritual Beatle, but weepy Beatle was more like it. While My Guitar Gently Weeps. This Guitar (Can’t Keep From Crying). Isn’t It A Pity. Don’t Let Me Wait Too Long. Lots of crying on a George Harrison record. In fact, the original material slated for Somewhere In England included a track called “Tears of the World.” The label didn’t like it, so George replaced it with new material including “Teardrops,” lest the album lack in lachrymosity. Presented here in an edited form, “Teardrops” may be the worst song ever to grace the A side of a George Harrison single. Sad, indeed. Better is the B side, “Save The World,” which is a clever bit of black humor mixed with a likeable melody. (Hidden in the fadeout of the song is a sample from an old George Harrison song called, you guessed it, “Crying.”) A demo version of “Save The World” was later selected as the bonus track on the remastered (and presumably re-unappreciated) re-release of Somewhere In England.

The Word
“For these things I weep; my eyes flow with tears; for a comforter is far from me, one to revive my spirit…” (Lamentations 1:16).