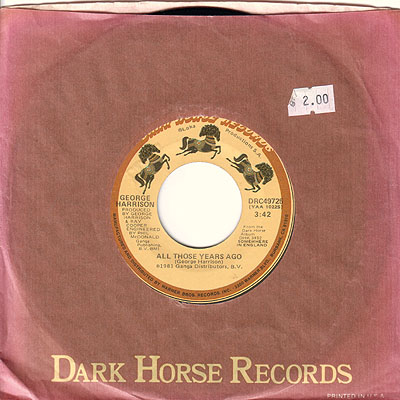 John was dead, and what we got four our troubles was the thab three playing a trite tune that fell remarkably short of our own imaginations of the fab four’s reconstitution. At least that was my impression all those years ago. Today, I’ll admit it’s not a bad song, no more or less annoying than Harrison’s “When We Was Fab,” though less intriguing than The Beatles playing alongside the zombified Lennon on “Free As A Bird” and “Real Love.” Although the label may have had ulterior motives of profit, there can be no doubt that George Harrison wrote the song as an homage to his friend with no motive of profit or career advancement. That it became his highest charting single in years was unfortunate for all involved. The flip side is one of the album tracks written before Lennon’s murder, “Writing’s On The Wall,” which is eerily prescien—though where The Beatles are concerned coincidence and chance are presumptions that the unenlightened use to guard themselves from the truth. At the end of the year, this was released as a back-to-back single with “Teardrops” because, apparently, Warner Brothers felt we hadn’t suffered enough.

Back-to-back hits (yes, I know) single
A1. All Those Years Ago
B1. Teardrops