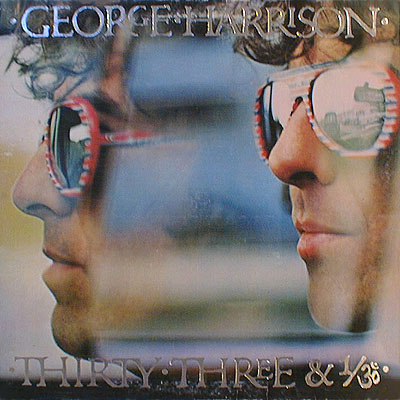 [Kronomyth 9.0]
You say you want some revolutions?

Thirty-Three & 1/3 is a clever title, as it alludes to both the revolutions per minute (RPM) of an elpee and George Harrison’s age at the time. The album has its share of admirers and detractors, strikingly similar to John Lennon’s Walls & Bridges in many ways. Both albums featured a pair of strong singles (in this case “Crackerbox Palace” and “This Song”), a mix of languid ballads and boogaloo (i.e., a slightly soulful, kinda funky brand of uptempo rock music), and more emotional depth than Paul or Ringo could plumb. Fans of the album can point to well-written songs that smack of vintage Harrison, rendered in countrified boogaloo (“Woman Don’t You Cry For Me”), a sort of spiritual disco (“Learning How To Love You”), or the lightly gilded and translucent pop that Harrison could conjure on command (“Beautiful Girl”). Detractors will fault Harrison for settling into too comfortable a setting and not wringing more from his muse. In a way, it’s flattering that George is held to the same high standards as John and Paul (and, in my opinion, this gets the nod over Wings at the Speed of Sound as the better bicentennial ex-Beatles album). “This Song,” which lampoons his legal troubles over “My Sweet Lord” (though the incorrigible Beatle steals from his own “What Is My Life” in the process) and the remarkably funky “Crackerbox Palace” are primo George-o. The rest of the album is rarely less than engaging, with some fine guitar work (“Pure Smokey”), sage advice (“See Yourself”) and a kickin’ one-man horn section in Tom Scott. Thirty-Three & 1/3 is a good album, not a great one. Together with the eponymous album that followed and 1987’s Cloud Nine, it’s one of the few Dark Horse releases you can bet on showing you a good time. (Thanks, Jim, for letting me keep this one.)

The Pictures
Album design and photography by Bob Cato.