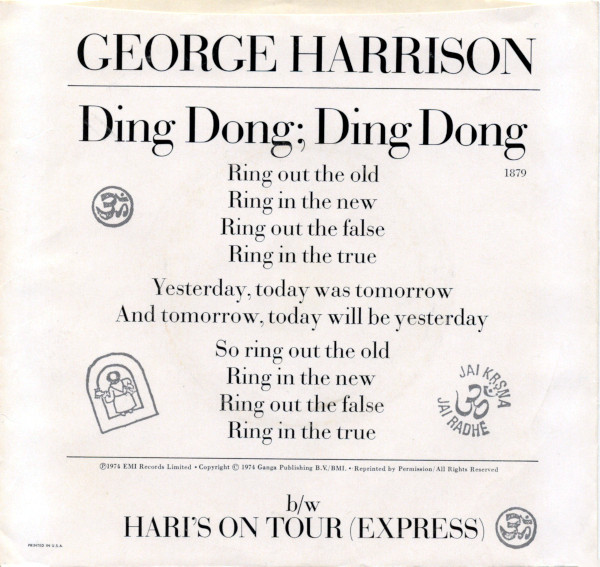 George apparently hadn’t forgotten that his old acquaintance, John, had a hit with “Happy Xmas.”

It took a pair of brass bells to record an album with laryngitis and, really, what better way to ring in the new year than with one of The Beatles? “Ding Dong, Ding Dong” isn’t a perennial holiday favorite like “Happy Xmas (War is Over)” or “Wonderful Christmastime,” but it does fill the need for a New Year’s Eve song from the fab four (a Beatles song a day keeps the doldrums away).

The decision to use actual bells in the melody is appreciably different; they’re not just an effect, but integral to the song. For the occasion, George also recorded a new song as the B side, “I Don’t Care Anymore,” featuring only acoustic guitar and jew’s harp. George actually introduces it with the words “Got a B side to make, ladies and gentlemen,” and then proceeds to record what could best be described as a really drunk guy playing “Don’t Think Twice, It’s Alright” with made-up lyrics. Wikipedia has a whole page on it, which likely took much more time to create than the original song. In the US, the instrumental “Hari’s On Tour (Express)” was pressed into service, because we care even less about B sides than George, apparently.