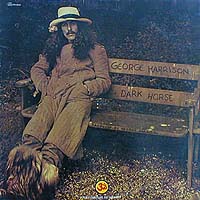 Kronomyth 6.0: AT THE RISK OF BEATLING A DEAD HOARSE. Ahem. Let me just clear my throat before lighting into Dark Horse. George Harrison was going on tour and, since tours typically promote an album, he decided to record a new one. Only George was beset by a bad case of laryngitis during the recording sessions (and the subsequent tour), and what came out of the gate was more of a Dark Hoarse. The record still charted well enough in the US since The Beatles’ fans were a forgiving lot (exhibit A: Ringo Starr), but doff your rose-colored teashades and you’re looking at one of the lamest efforts from any of the Fab Four. “Ding Dong, Ding Dong,” which is about as good as it sounds, joined the dubious ranks of jingle bell rockers and remains the only track from Dark Horse that still shows up on American radio; presumably the English trot out “Dark Horse” from time to time as well. Of the remaining songs, “Simply Shady” is a bright spot, and “Maya Love” and “So Sad” aren’t so bad. But this album never should have been recorded; the material wasn’t there to support it and George’s voice was is no condition to do anything but butcher the few good ideas he had. Unlike the earlier, spiritual Material World, Dark Horse finds George in a less peaceful mood, striking back at Pattie and Eric Clapton (in a failed reworking of The Everly Brothers’ “Bye Bye Love”) and what I always took to be a poke at Frank Sinatra in the opening of “Far East Man” (although, in his defense, Frank’s version of “Something” was nothing short of criminal). All in all, not the tastiest apple on the tree, despite the tantalizing cover—which was switched with the back cover on the Capitol non-gatefold reissues, probably to cut their costs/losses.