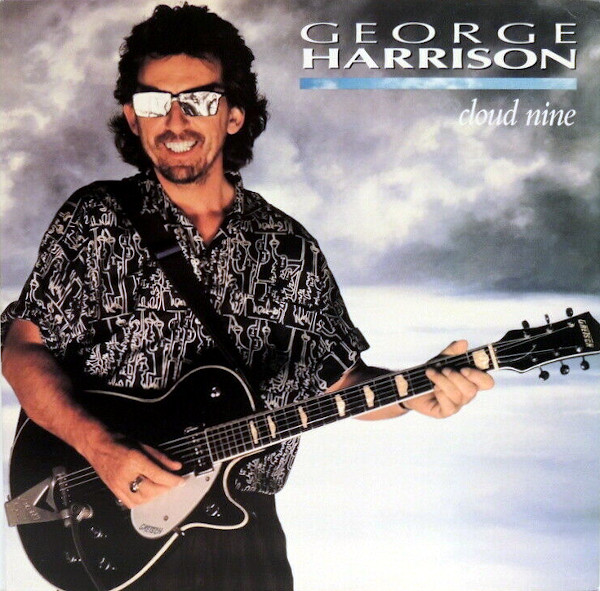 George Harrison finds his second wind with his biggest fan, Jeff Lynne, behind him.

The best George Harrison album in years*. This was a new golden age, the wheel of fame having spun full circ… oh, you looked down and read the asterisked part already, didn’t you? No point then in my pretending to share a “george moment” with you. Not that I’m retracting my asterisk. I mean, All Those Years Ago? Blood From a Clone? Gone Troppo? Crap, crap and what’s that other word for crap? Oh yeah, crap. Then comes Cloud Nine and George finds his second wind. No matter that most of the wind is generated by the world’s largest (electric) Beatles fan, Jeff Lynne. The XELO leader was just getting started; Tom Petty, Roy Orbison and Ringo Starr were all in lynne for a makeover.

I really like ELO, and I love the Beatles, but the one was essentially an adept imitation of the other. On Cloud Nine, the combination of original ingredients and imitation flavors can sometimes leave an odd taste in your mouth (e.g., “When We Was Fab,” which is what I secretly wanted “All Those Years Ago” to sound like), with Jeff Lynne presumably licking his fingers in delight. Even without Lynne, this still ends up being George’s best album of the ‘80s, backhanded compliment that it is. With the added participation of Eric Clapton, Elton John and Ringo Starr, George had to be more engaged this time around and it shows in the material.

But Cloud Nine isn’t the celestial alignment that some have made it out to be. Rather, I tend to see this as a consummation of Jeff Lynne’s Beatles fantasies with George playing the gracious host. For the remastered reissue, two tracks from the quickly forgotten Shanghai Surprise film (which Harrison produced and partially scored) were added, “Shanghai Surprise” (a duet for Vicki Brown) and “Zig Zag,” just in case you were jonesing for a couple more Hoagy Carmichael songs.

*And holy crap were some of them awful.