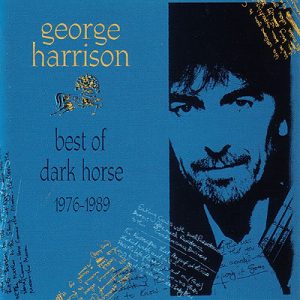 Kronomyth 13.0: THE BEAST OF DARK HARRISON. Apparently, you can make a silk purse out of a sow’s ear. The Dark Horse years are hardly synonymous with the best of George Harrison, though the records were seldom as bad as critics made them out to be. Sure, they had their soft spots (what Beatles solo album doesn’t?), but you could make a nice exhibit out of the more tuneful entries, and that’s what happens here. “When We Was Fab,” “Got My Mind Set On You,” “All Those Years Ago,” “Wake Up My Love” and “Blow Away” scrape the sweet stuff from the hive without listeners getting stung by a Somewhere In England or Gone Troppo. Also included are three swell new tracks: “Cheer Down,” “Poor Little Girl” and “Cockamamie Business.” The track selection is very good, making a few maverick choices (“That’s The Way It Goes” from Gone Troppo, “Here Comes The Moon” from his untitled 1979 elpee) and ignoring chronology (which accidentally casts “Love Comes To Everyone” as an artifact but otherwise works very well). The only knock I have on the collection is that it all but abandons Thirty-Three & 1/3, which was released too late to be included on George’s first greatest hits album. Including only “Crackerbox Palace,” and even then only on the CD version, is an obvious misstep, as “This Song” certainly belongs in the company of these songs. Someday, maybe, a double-disc compilation of George’s best solo music (perhaps including a handful of Beatles tracks) will grace the marketplace and render this superfluous. But until then, the uneven nature of his ‘80s output renders this compilation the post-Apple cart to pick from first. Unfortunately, I’m told, it’s currently out of print. The labels (out of the goodness of their wallets) will likely opt to produce a new career retrospective rather than reissue this disc, so you better start saving now. (Note: I’m actually trying to sort out what tracks appear on the US and foreign elpees and cassettes. I can only vouch for the US CD since I own it.)