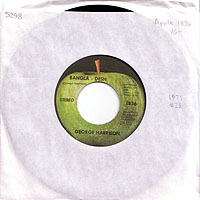 [Kronomyth 3.5]
Power to the people of East Pakistan.

A pretty good song for a very good cause, “Bangla-Desh” turned international attention (and aid) to the plight of the people of East Pakistan (Bangla-Desh) in the wake of a civil war that looked a lot more like genocide. The song is historically important as one of the earliest examples of music made to benefit charity; Harrison would put together an all-star concert soon after that many have seen as a precursor to Live Aid. The song’s musical importance is more debatable. It has some nice horn arrangements but lacks a memorable melody; I wasn’t a huge fan of John Lennon’s “Power To The People” either. The flip side is honestly the more likeable track, a homespun acoustic number that could pass for one of those clever Paul McCartney ditties. Written after the death of his mother, “Deep Blue” was later recycled, sort of, for Harrison’s “Soft-Hearted Hana.” At least, I’ve always thought the two tracks sounded alike.

The Players
Produced by George Harrison and Phil Spector.