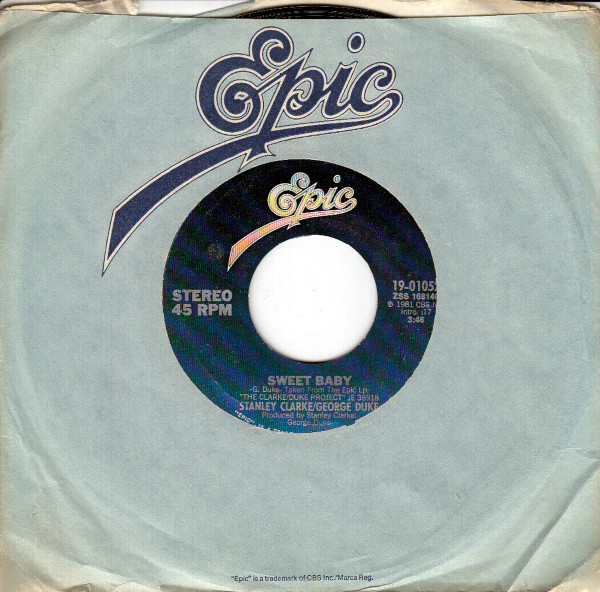 George Duke and Stanley Clarke savor the sweet smell of success on their biggest single. Hint: it smells like money.

Kronomyth 8.1: The sweet smell of success.

“Sweet Baby” is a nearly perfect disco love song, should such a thing exist. I know, you probably weren’t expecting it to come from a couple of fusion all-stars like George Duke and Stanley Clarke, but if you’re going to shake your tailfeathers for the peahens it might as well be choreographed to something classy. Duke and Clarke appeared in a video to support this, apparently, although I don’t remember seeing it on MTV or any of the other late-night shows that played music videos because this wasn’t targeted to young white males. Sorry to be blunt about it. It’s funny (read: “strange”) that media stations separated music based on demographic data without really considering the crossover appeal, since much of music’s natural magic is its universal appeal.

The flip side is “Never Judge A Cover By Its Book,” a tantalizing instrumental from Stanley Clarke that clocks in at under two minutes. It’s sort of a gyp as B sides go, but remember that labels were usually looking for the least likely candidates for a second single when selecting the B side, lest they cheat themselves out of a dollar’s profit. That’s actually not sarcasm, I’m being serious. One of the few benefits of digital music, I suppose, is that record executives no longer have to sit around a table and discuss which is the worst song on an album. Apparently, Epic forget to take notes from the first meeting and selected “Never Judge A Cover By Its Book” as the B side for the next single too, “I Just Want To Love You.”