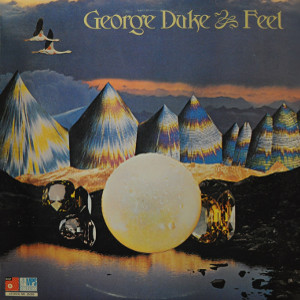 A crossover of space fusion and synth funk, featuring Frank Zappa as the mysterious Obdewl’l X.

Feel is a transitional record between the space fusion of his last effort, Faces In Reflection, and the synth funk of the future. It also features Frank Zappa’s blistering electric guitar on two tracks, billed here as the mysterious Obdewl’l X. If you’re approaching this from Faces, a lot of this will feel familiar. The new wrinkle is the funk (“Funny Funk,” “Old Slipper”) and a certain Barry Whiteness in the spirit/love vibe of songs like “Feel” and “Love.”

George Duke has a gentle voice, which he multitracks to give it an extra dimension. Flora Purim also appears on one track, “Yana Aminah,” but it’s a missed opportunity as Duke seems musically out of synch with what should have been a slam-dunk Brazilian jazz number. Zappa is the elephant in the room, literally. His guitar solos on “Love” and “Old Slipper” completely dominate the surrounding landscape like an eclipse; in fact, Duke seems to throw a musical wrench into “Old Slipper” just to prepare the listener for Zappa’s heavy footfalls.

The remaining songs follow the space fusion of Faces for the most part: “Rashid,” “Cora Joberge,” “The Once Over.” An interesting exception is the short theme from an unfinished opera, Tzina, a classical jazz piece that explores a heretofore hidden dark side to Duke. (Pieces of Tzina would appear over the years on other Duke works.) The album’s closing “Statement” simply restates the theme to “Love.”

Scene and not Heard.

It’s fair to say that the George Duke of the future arrives on Feel. You get the sense, listening to the opening “Funny Funk,” that you’re witnessing the birth of something important as Duke adds progressive layers of synthesizers to build up the groove. The pull of Zappa’s orchestral music is still strong, and both the vocals and arrangements recall The Mothers more than a few times, but the sexy spirituality and funkiness are pure Duke.

It’s worth noting that this album marks the end of the unofficial George Duke Trio Mk. II, as John Heard was replaced by Alphonso Johnson for the next album, The Aura Will Prevail. Ndugu was a stroke of fortune for Duke, but I was always bored with Heard on the electric bass (in his defense, he was an acoustic bass player at heart). Ndugu also gets a songwriting credit this time on “The Once Over,” featuring Airto Moreira on percussion and continuing the adventures begun with Herbie Hancock on Mwandishi.

For fusion fans, Faces is still the first album to own, but Feel is a fine followup purchase. As for Zappa fans, I understand the man has released a few albums under his own name, so you may want to start there.

Cover art by Sätty. Back cover photography by Baldhard Falk.