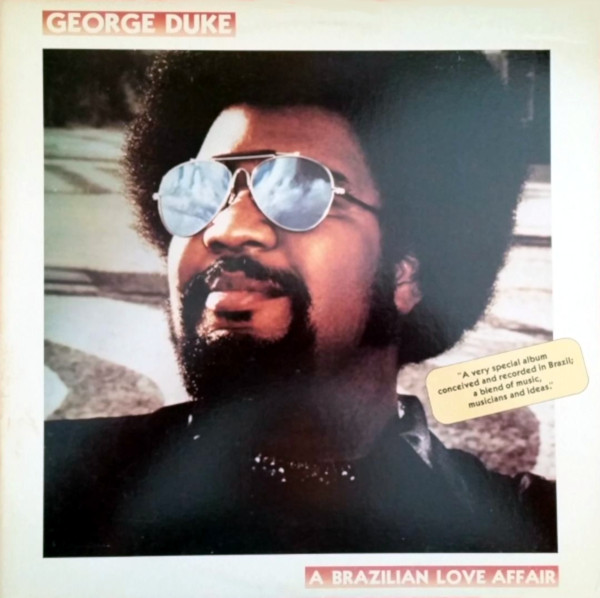 Dukey goes to Brazil and brings the funk with him, creating a new fusion of sounds.

It seems that every American jazz musician explores the music of Africa and Brazil at some point or another. George Duke had already shown in interest in Brazilian music, recording Milton Nascimento’s famous “Maria Tres Filhos” as far back as 1974 (on Faces In Reflection). But A Brazilian Love Affair is something very different: a fusion of American jazz/funk and Brazilian jazz/pop that consummates Duke’s love affair with the country and its music.

Duke alludes in the album notes to finally having the “means” (i.e., the money) to make this record, and we can infer from his reference to this as a “labor of love” that he didn’t expect to get his money back. The album didn’t chart particularly well in the US, at least not as well as his earlier funk albums, although listeners certainly got their money’s worth. Duke doesn’t simply appropriate Brazilian pop for his own funky designs but seeks to find middle ground between the two. That said, Duke can’t seem to resist adding a couple of radio-friendly funk numbers into the mix just to hedge his bets.

The opening “Brazilian Love Affair” is such a commercial cushion. Selected as the album’s single, it is essentially Duke’s funk band augmented with Brazilian percussion (courtesy of Airto Moreira). You get a feel for the Brazilian currents to come, but you also get a funky bass solo from Byron Miller and a familiar Rhodes solo from Duke on the fade.

“Summer Breezin’” is where the album hits its stride, blending Brazilian and American funk/disco music into something unique and wonderful. Lynn Davis and Josie James do a great job on the backing vocals (it’s a shame they weren’t used more on these sessions) and the whole piece blows by like a cool breeze. Duke also slips a terrific trombone solo into the arrangement, courtesy of Bill Reichenbach.

“Cravo e Canela” is the first of two Milton Nascimento songs that feature the artist himself on vocals and guitar, and this leans much closer to traditional Brazilian music. Duke’s contribution to this and the closing Nascimento track, “Ao Que Vai Nascer” (which would roughly translate as “To those yet born”), are minimal. I suspect Duke’s light hand comes from the fact that you can’t improve upon perfection. As much as this is Duke’s project, Nascimento is the star of this album. (He was, of course, already an established star in Brazil.) The haunting “Ao Que Vai Nascer” will remain with the listener long after the album is over.

After a short piano piece that was apparently composed one morning during the sessions, Duke is joined by Flora Purim and an all-Brazilian band for the delightful “Brazilian Sugar.” This and “Summer Breezin’” are probably the best representatives of the fusion that Duke was after, although “Up From The Sea It Arose And Ate Rio In One Swift Bite” gets an honorable mention for working a fiery electric guitar solo from Roland Bautista into the mix.

“Sugar Loaf Mountain” and “Love Reborn,” on the other hand, fit more into the “inspired by Brazil” category. They feature Duke’s funk band and wouldn’t be completely unexpected on a typical George Duke record from this period, except for perhaps the wordless vocal style adopted by Duke on “Love Reborn.” When the band is joined by another Brazilian singer, Simone, on “I Need You Now,” the balance shifts back to the middle.

Personally, I wasn’t that jazzed about hearing yet another funky followup to Reach For It, so the decision to take a southern detour and experiment with Brazilian sounds is a welcome departure. (I also love Brazil and its music, and not least because half of my family is Brazilian.) Whether it changes the way you hear George Duke, the answer is “probably not,” although it should expand your musical horizons a bit and get you running to buy at least one Milton Nascimento record.