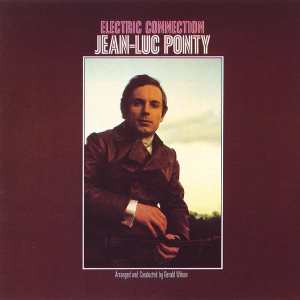 Ponty was flown into the US to record this album with George Duke and Gerald Wilson, but the performances feel dialed in.

Jean-Luc Ponty’s new American label, World Pacific Jazz, wasted little time in marketing their jazz violin phenomenon. Ponty was quickly paired with WPJ mainstay Gerald Wilson and his big band for an album of mainstream jazz/swing, Electric Connection. Wilson wrote the arrangements, Ponty provides the solos and a few original compositions, George Duke plays the piano, but the connection never really happens. Most of the time, Ponty’s violin seems out of place in the music or, more to the point, Wilson’s arrangements make space for the violin but rarely make good use of it.

The idea of a violin in a jazz setting, especially one so free and fluid, is a novel and exciting concept. In my opinion, it deserved a novel and exciting setting, not a standard set of jazz/swing/funk that might have come from the soundtrack to a second-rate crime film. The rhythm section of Paul Humphrey and Bob West is at least sympathetic; Duke is criminally undermiked. If you’re interested in Ponty’s earliest work, I would start with the live recording at Thee Experience featuring the George Duke Trio. That show was an electric affair which gave the violin plenty of breathing room. On Electric Connection, unfortunately, the violin is something of a caged bird. You’ll encounter some nice solos (“Hypomode Del Sol,” “Forget”) and perhaps develop a deeper appreciation for the violin as a jazz instrument, but nothing on here will change your world. The kindness of critics toward this album is likely due to deference to the violinist himself; the music itself is merely adequate and occasionally ill-fitting (he sniffed).

Arranged and conducted by Gerald Wilson.