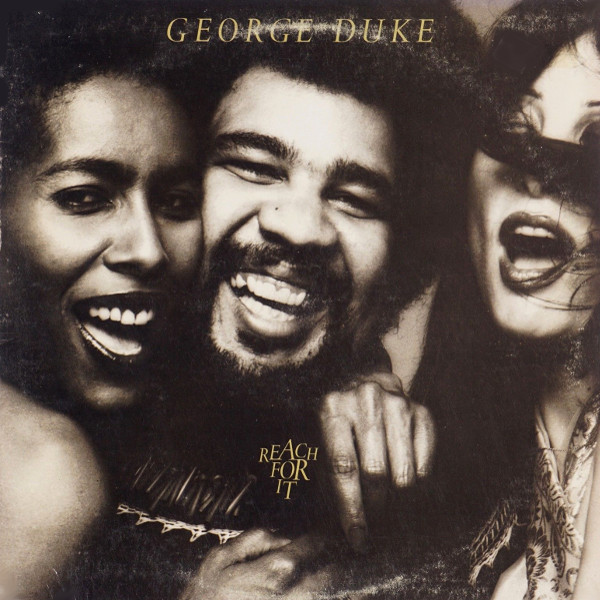 In which our hero reaches for the golden ring and grabs it, becoming a funk sensation.

“I try to take funk and mix it up with my jazz. I get a lot of this funk, and it’s fun and stuff, but it’s laid on a bed of jazz. The bread is the jazz, and I just spread some funk on there, and everything is all right.” – George Duke, as quoted in a Wax Poetics article.

This is the album that put George Duke on the map. The sly, joyous funk of “Reach For It” became a big hit and set the stage for a string of R&B singles over the next few years. I couldn’t tell you why Duke’s high-level brand of hot funk and cool fusion suddenly clicked with audiences; maybe it has to do with how much fun he’s clearly having.

Reach For It finds Duke and his band right in the middle of the funk (“Reach For It,” “Watch Out Baby”) and the fusion (“Hot Fire,” “Omi”), sometimes blending the two in the same song (“Diamonds,” “Lemme At It”). Duke retained most of the band from his last record, replacing guitarist Mike Sembello with Charles Icarus Johnson (Johnson and Duke had played together on Stanley Clarke’s School Days) and adding percussionist Manolo Badrena (Weather Report). The new players and supporting female singers are put to good use on a few upbeat Latin fusion numbers that invite comparison to Chick Corea and Pat Metheny. Also featured here are a pair of spacy synthesizer bookends, “The Beginning” and “The End,” that make you wish the man would make an entire album of avant-garde electronica.

Duke is smart to recognize the benefits of bringing an electric guitarist into his band; I guess working with Frank Zappa will do that. Johnson does a fine job of fitting into the finely meshed gears of Duke, Ndugu and Byron Miller. For his part, Duke continues to impress with his mastery of electronic keyboards and stellar soloing. Though fusion is still the operative gameplan, Duke infuses it with funk and fun to reach new heights of happiness on Reach For It. The expanded compact disc reissue includes the instrumental “Bring It On Home,” which does just that with a winning melody.

All selections composed and arranged by George Duke unless noted.