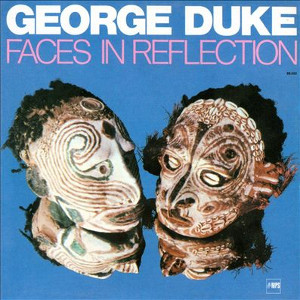 Duke adds Headhunter Ndugu to the trio and releases a spacey album of jazz fusion that invites comparison to Zappa and RTF.

Kronomyth 5.0: A reflection in fusion.

The music of Frank Zappa was a reaction to the times. The music of George Duke is a reflection of the times. The one breeds genius, the other geniality. Faces In Reflection is as genial an album of jazz fusion as you’ll find in the early catalogs of Stanley Clarke and Lenny White—high praise to fusion aficionados.

George Duke unleashes the synthesizers and explores some very interesting spacescapes that will feel instantly familiar to followers of RTF: “North Beach,” “Psychosomatic Dung” (which clearly shows the influence of Frank Zappa) and “Faces In Reflection” (both parts). Like Chick Corea, Duke also intersperses Latin music (“Maria Tres Filhos,” “Da Somba”) and solo piano interludes into the proceedings. Despite the seemingly limited lineup of only bass, keyboards and drums, the trio of Duke, John Heard and Ndugu (Leon Chancler) generates plenty of energy on this session. Judicious multitracking helps to fill in the gaps, such as Duke emulating a rhythm guitar with his synth on “The Opening.” Ndugu, who caught my attention on Herbie Hancock’s Mwandishi, continues to make a case for himself as one of the pre-eminent jazz rock drummers here; his unique solo on “Maria Tres Filhos” is nothing short of amazing.

The consensus that Faces In Reflection is a very good fusion album is accurate, although it’s a crowded field. Duke can certainly lay claim to that field; in fact, this album is very much a reflection of his own personal journey at the time (Flora Purim, Frank Zappa). Yet Duke quickly forsook fusion for funk, leaving this record as a tantalizing testimony to what might have been a fruitful multiyear foray into fusion before funk’s inevitable call. If you’re interested in what a George Duke fusion album would sound like, Faces In Reflection will leave you suitably impressed.