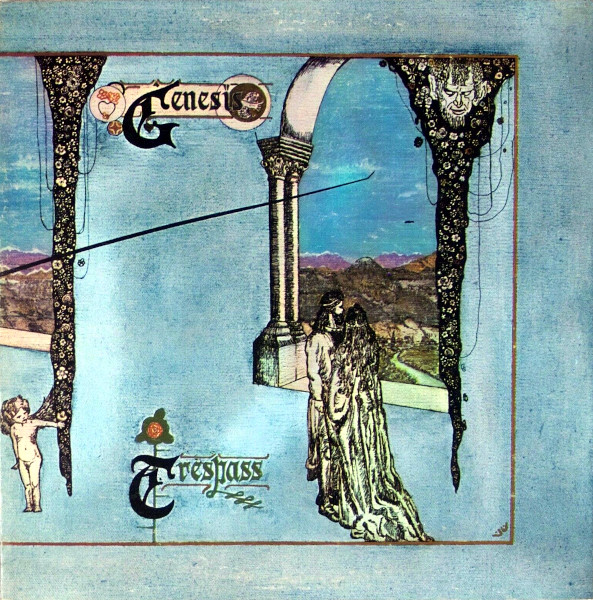 An early, interesting tapestry of progressive epics and music-box madrigals.

Kronomyth 2.0: Over the garden wall we go…

Now this is a revelation. Trespass marks the beginning of the band’s epic journeys into the progressive woods. Although not entirely unstuck from their youthful debut—religious imagery still abounds—the effect is night and day. A change in the drummer’s chair (John Mayhew replaces John Silver) gave the group slightly more dramatic range, but the real change comes in the choice of instrumentation (organ/mellotron) and ambitious production.

If you’re listening for a direct link to their past, you’ll find it on “Visions of Angels.” It’s one of the few songs where Anthony Banks favors piano over organ and, while it’s still more musically advanced than anything on From Genesis To Revelation, it’s not so far removed from it either. Everything else on Trespass is a quantum leap in vision and execution. Peter Gabriel and the group appear much more confident as they construct epic structures of sound on massive organ riffs, electric guitars, intricately woven acoustic guitars and Mayhew’s heavy-handed but effective drumming.

Rather than looking back to their debut, Trespass looks forward to their next album. “White Mountain” and particularly “The Knife” are clear harbingers of the giant hogweed, and could be counted among the band’s earliest progressive rock masterpieces. The knife is a recurring lyrical theme, appearing on “Looking For Someone,” “Stagnation” and, of course, the track of the same name. I couldn’t tell you what the connection is, any more than I always understand Gabriel’s Christian references. “Looking For Someone” alludes to Damascus (the famous scene of Paul’s conversion), “Visions of Angels” makes the grim pronouncement that “God gave up the world its people long ago,” while the gentle “Dusk” references Jesus by name. Maybe the cutlery and religious imagery are lyrical crutches. Then again, didn’t Gabriel heal every lame line with the brilliant “Supper’s Ready?”

On their first record, I found it difficult to tell who wrote what, or couldn’t be much bothered to think about it. On Trespass, you can hear the songwriting of Anthony Phillips, Michael Rutherford and Anthony Banks at work in the music. “Stagnation,” for example, sounds very much like the later work of Phillips (e.g., The Geese And The Ghost), while “Dusk” recalls the arpeggiated styles of both Banks and Rutherford (a quick glance at Wikipedia seems to confirm that—glad to know my Genesis taste buds are still working despite the cold).

All praises aside, you’ll probably want to start your adventures with Genesis elsewhere; say, Foxtrot or (better still) Selling England By The Pound. Then I’d go forward through Wind and Wuthering (do not stop on Genesis Live) and slip Nursery Cryme somewhere into that mix. At that point, with a colorful array of Genesis tunes dancing in your head, I would make the trip to Trespass. It is essential Genesis not because it is a brilliant album (it really isn’t), but because it is the first to showcase what would become the essence of Genesis: dramatic tales where heaven and hell hang in the balance.