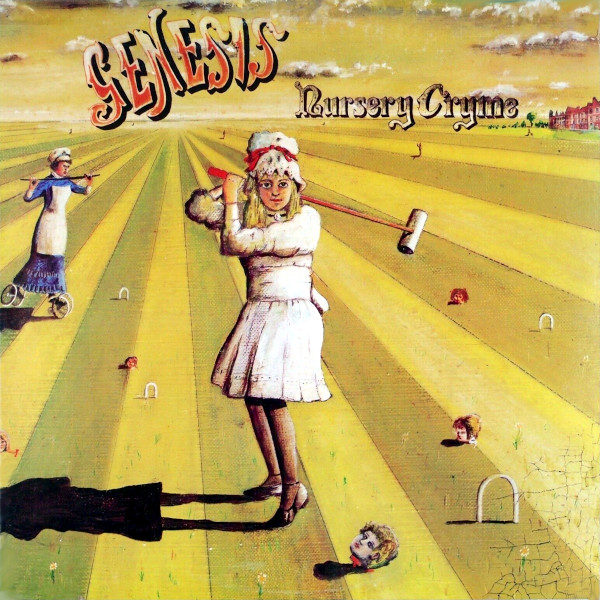 With Phil Collins and Steve Hackett on board, Genesis enters its classic phase of imaginative storytelling.

The opening of “The Musical Box” isn’t a great leap from their last album, Trespass. Halfway through the song, however, new members Steve Hackett and Phil Collins lead a sonic assault that makes “The Knife” seem a dull exercise. From that point forward, Nursery Cryme never leaves its lofty heights as the band reveals a richer sound steeped in fairytales, madrigals and quasi-classical musical passages of daunting complexity.

Nursery Cryme marks the true beginning of classic Genesis, a period of six or so years during which the group rested comfortably at the top of the progressive rock movement with Yes. I’ll concede that The Yes Album was more artfully done, but both bands take the listener to faraway places for forty minutes, something most progressive rock acts struggled to do for four. The obvious source of change is the addition of Collins and Hackett, but it’s not the only, nor even the biggest, difference. Peter Gabriel’s storytelling is far more imaginative on Nursery Cryme, from his tale of the Triffid-like hogweed to a retelling of the Greek mythological love story between Hermaphroditus and Salmacis. And Tony Banks introduces more of the mellotron into the music, which gives the arrangements a greater range of expression and dynamism. All put together, the band’s musical vision leaps from its storybook pages into flesh-and-blood reality.

The band would refine this formula over the next five years, even as Gabriel left the group. “Seven Stones,” for example, would be echoed on “Cinema Show” (even down to its ambisexual references), and “Harlequin” bears a striking resemblance to “Entangled” from A Trick of the Tail. While many point to “The Musical Box” as the album’s crown jewel, to my ears it’s just a mishmash of different musical pieces that collectively is only slightly edgier than “The Knife.” The standalone piece, “For Absent Friends,” is just a musical vignette by contrast but paints a more vivid picture. And then there’s “The Return of the Giant Hogweed,” on which the garden wall is completely torn down and the listener is admitted into the fantastical world of Genesis, to be lost for years.

Side two starts with “Seven Stones,” my favorite song on the album. I couldn’t tell you what it means, and yet there’s something uniquely profound in the words and the music. One of the wonders of progressive rock is the idea of great truths glimpsed, which occasions our return but never admits us into its understanding. After all these years, I still don’t definitively know what “Seven Stones” or “Heart of the Sunrise” mean. I think I know what they mean, yet I suspect that knowledge is different for every listener. “Harold The Barrel” is a dark character study that likely owes its inspiration to Gabriel, while also being one of several songs that brings Phil Collins’ voice into the fore (“For Absent Friends” and “Harlequin” being the others).

The real crown jewel of Nursery Cryme, in my opinion, is “The Fountain of Salmacis.” As a lover of Greek mythology, I find the story of Hermaphroditus and Salmacis to be eminently suitable as a song about love’s yearning for communion. One of the things I appreciate about Genesis is their general resistance to presenting their longer songs as extended suites (“Supper’s Ready” notwithstanding). You can easily imagine “The Fountain of Salmacis,” “The Return of the Giant Hogweed” and “The Musical Box” with separate movements lettered A through D, but I believe that would only serve as a distraction. Instead, the movements flow together as a single tale told in one breathless sitting. Drawn with Hermaphroditus into the cool waters of co-union with our lady of the lake, what further adventures awaited?