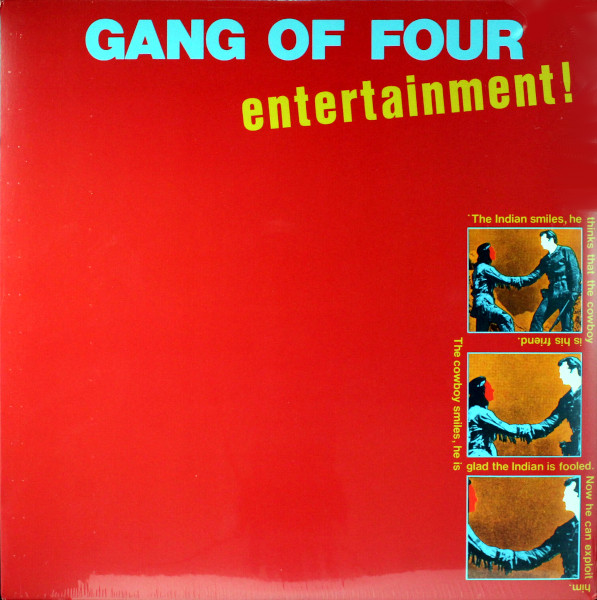 The Clash, The Sex Pistols and The Jam was bracing stuff, but for a real slap in the face, that’s Entertainment!

The revolution had begun in earnest! Actually, “revelation” was the impression I had as a kid when I first heard Entertainment! on my revolving record player. The band went right to the root of the problem (capitalism) and tore it up in a way that could only be called liberating. None of the conventional rules applied here: guitars were harsh instruments of aggression played with surgical precison, drums pounded at their pleasure, vocals were replaced with the internal dialogue of a schizophrenic and a white punk could lay down some of the funkiest bass riffs imaginable smack in the path of a speeding train. (No wonder Flea lists this band as an influence in the expanded reissue liner notes.)

The opening side of music on Entertainment! represents some of the greatest punk music to come out of England in the late ‘70s. The Sex Pistols and The Clash and even The Stranglers arrived first, but Gang of Four treated them like an opening act for their own anti-sloganeering agenda. Anarchy in the UK? Maybe. London’s burning? If you say so. Only Entertainment! spoke to a battle with commercialism and dehumanization that my American mind could relate to. “Please send me evenings and weekends” (from Return the Gift), “The poor still weak the rich always rule” (from Not Great Men), “This heaven gives me migraine” (Natural’s Not In It). We were awash in a sea of polluted principles and here was Gang of Four throwing us a life preserver.

The songs on Entertainment! represent the band’s best work: Anthrax, Ether, “Natural’s Not In It,” At Home He’s A Tourist, Damaged Goods, “Not Great Men.” The music that followed from Gang of Four continued the discussion, but the main points of their argument are made here. Though hard liners when it came to their musical vision, GoF does mix things up a little, mostly on the second side. Listening to Glass, Contract and I Found That Essence Rare, you’ll hear similarities to the early work of Adam & The Ants, The B-52’s and XTC that suggest Gang and the greater gang drew their inspiration from the same source. Yet none of those bands released a debut as stunning as Entertainment! It may have been anti-jingoism, but I was sold after the first minute. (Note: The 1995 reissue includes the contents of 1980’s eponymous EP, the yellow one.)

All songs written and arranged by Gang of Four.