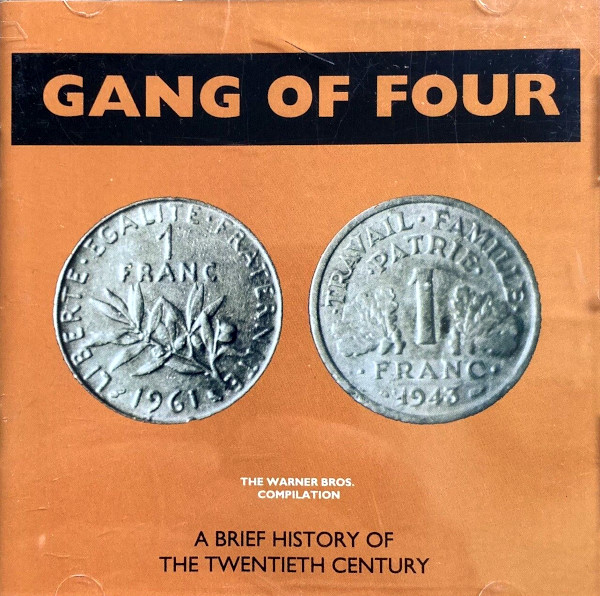 Twenty songs from Gang of Four adds up to greatness on this compilation.

Though they were fighting the good fight, The Sex Pistols and The Clash were in a sense flogging a dying empire. Gang of Four understood where the new battles were being fought: the board rooms, the bedrooms, the factories, the stock exchange floors. Their earliest elpees and EPs assailed the myth of capitalism: “Damaged Goods,” “Return the Gift,” “Paralysed,” “Capital (It Fails Us Now).” It was more than a musical revolution, it was music as a means of polemics. Gang of Four’s early works were controversial and liberating: atonal and mechanized, twisted like taffy, brutal and yet plainly dispassionate. Echo and The Bunnymen and U2 made similar music, but it was Gang of Four’s unflinching agenda that elevated them above the discussion of mere music.

A Brief History of the Twentieth Century is a none-too-brief review of these revolutionary icons, including the singles and standout tracks from their all-too-brief career. Beginning with Songs of the Free, Gang of Four backed off from the hard line and began to make inroads in the alternative club scene with songs like “Call Me Up” and “I Love a Man in a Uniform.” These songs exposed the rhythmic sensibilities that had been part of the original vision and prettied them up. They took the crossover too far on Hard, however, as “Is It Love” and “Womantown” reveal.

The eye-openers are found at the beginning of the book: “Natural’s Not In It,” “Anthrax,” “Not Great Men.” The criticism some have leveled against Gang of Four is that their early songs were simply variations on the same revolutionary theme. (You could make the same charge against Echo and The Bunnymen.) But as a teenager, they seemed more like complementary arguments from the same political tract. If one song was a blow against the bastions of capital greed, could we begrudge the band a thousand blows?

In a brief history of the twentieth century, you won’t find a reference to Gang of Four. Yet you won’t have to read between the lines very long before you see the impact they’ve had on the music that followed them. A Brief History of the Twentieth Century is, like most of their titles, misleading: it’s neither brief nor is it history. It’s as alive and vital today as it was twenty years ago. If you’re not a member of the Gang yet, this is one Brief worth scanning. The liner notes from Greil Marcus alone are worth the price.