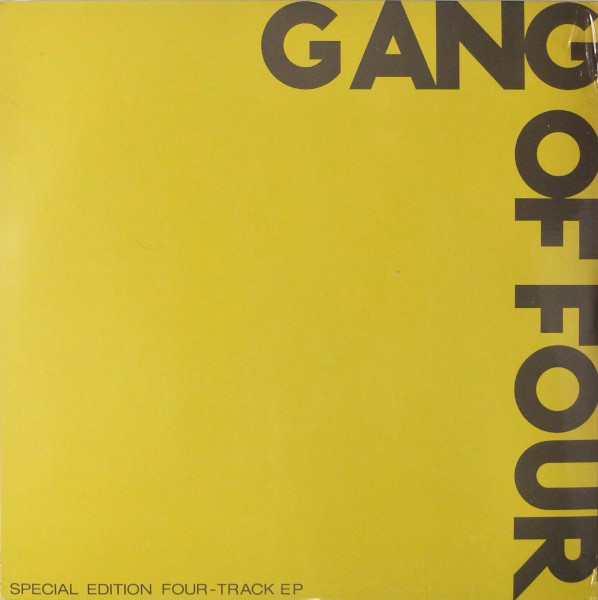 The 12-inch EP of this single, dubbed The Yellow EP in the absence of a proper title, was the first Gang of Four record I owned and, needless to say, not the last. This music floored me when I first heard it; still does today, actually. The drums, bass and guitar clicked together like a swiss watch set to a ticking time bomb while Jon King and the band dragged our sins of misogyny and militarism into the light, kicking and screaming. If punk music was indeed a revolution, Gang of Four were its most articulate ideologues.

Like all revolutions, the band fell apart quickly enough, but not before leaving an indelible imprint on the music that came after. Anywhere that funk and punk intersect (e.g., Red Hot Chili Peppers), you’ll find at least one Gang of Four fan. Outside the Trains Don’t Run on Time bespeaks what’s best about the band. Later included on Solid Gold, it features a driving and grating beat that hammers home the image of a man-controlled world spinning out of control. He’d Send in the Army repeats the theme of military control extended into the home.

The EP added two earlier tracks that pre-date their first album. It’s Her Factory would have fit right in with their later works; the razor-sharp arrangements are already in place, their enemy already in their sights. Armalite Rifle, recorded in 1978, is a different story. Here, Gang of Four were still forging their own path away from Sex Pistols, The Clash and The Jam. It’s antimilitarism is the common target, but the music had yet to be so tightly tweaked.

Surprisingly, the single didn’t catch on the UK. Maybe the BBC was afraid of a female uprising. Today, you can correct history’s mistake by buying up all the early Gang of Four records. And, while you’re at it, grab a couple of those Killing Joke albums too.