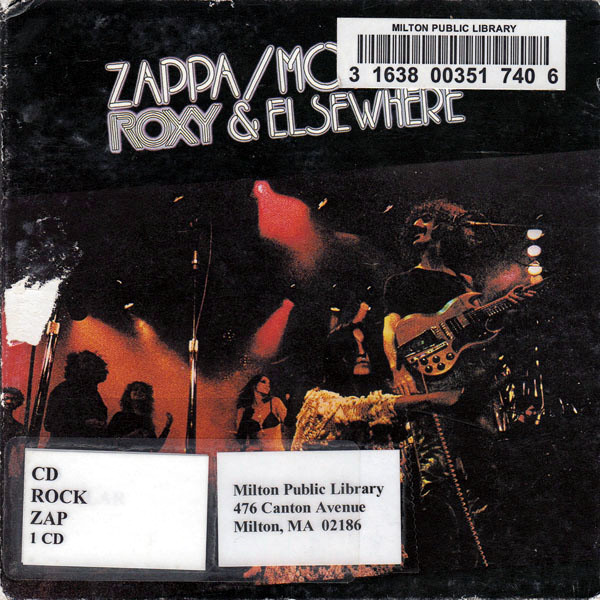 A sensational selection of new songs recorded live on double elpee and featuring the funny and furiously fast Zappa we all love.

If you enjoyed Over-Nite Sensation and Apostrophe, that’s good; it means you’re not dead. It also means you’re going to enjoy Roxy & Elsewhere a whole lot. But isn’t this a live record, you ask, and don’t all live records secretly sort of suck it? Well, yeah, the ones that don’t have strippers, bubble machines, trombone solos, jaw-dropping xylophone monologues and molten lava guitar licks probably do. Fortunately, Roxy & Elsewhere has all that plus immaculate sound (the credits confess to overdubbing) and two elpees of great, new songs such as “Village of the Sun,” “Cheepnis” and “Son of Orange County.”

Where most live albums tend to paraphrase a specific period of time, Frank Zappa‘s live albums are the exclamation points to those periods: Fillmore East, Zappa In New York, Tinsel Town Rebellion. Roxy captures what’s best about the Over-Nite Sensation->One Size Fits All period of Zappa without regurgitating it and includes some of his best songs over a long and amazing career. Released as a double album, Roxy plays up the live format by beginning each side with a preamble from Frank plus the usual audience engagement. From there, you’ve got your tasteful sexual innuendo (“Penguin In Bondage”), social criticism (“More Trouble Every Day”), a Firesign Theatre full of strange voices and at least two bands’ worth of brilliant soloing.

Although the classical jazz phase was awesome (Burnt Weeny Sandwich, Hot Rats), the 1972-1975 albums managed to best wed Frank’s sense of humor, jazz-inspired genius and rock guitar chops, and in many ways they represent the quintessential Frank Zappa sound. If you were hoping for live versions of “Zomby Woof” or “Montana,” too bad; you’ll need to fast-forward to the Stage series to get your fix. Roxy is, rather, one of those live albums you shouldn’t try to live without because, truly, your world is probably at least one radioactive poodle song shy of perfection.

All selections written by Frank Zappa unless noted.