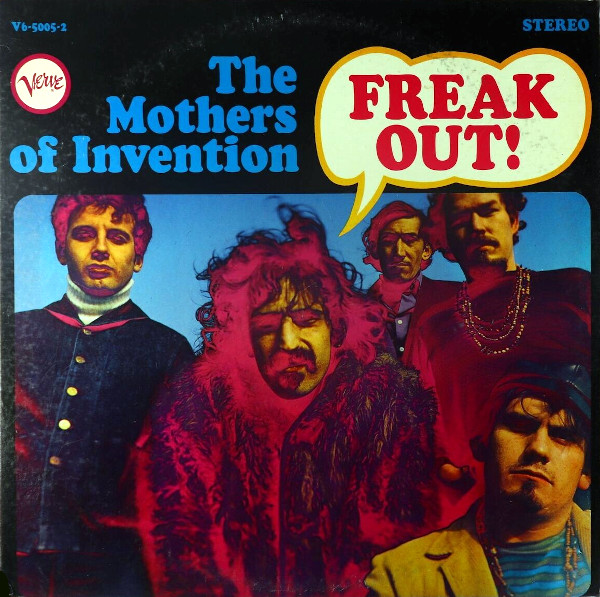 A freaking brilliant, sarcastic sendup of society and popular music in which all pretense to normalcy and decency is dropped.

An America that nearly peed itself in anticipation of meeting The Beatles wasn’t ready to meet The Mothers. Frank Zappa’s debut double-album opus existed in its own musical universe. Cute was replaced with caustic. Catchy pop hooks were covered in the barbed wire and broken glass of Zappa’s asocial intellect. Instead of Beethoven rolling over in his grave, you got Edgar Varèse creeping out of his crypt to eat your brain. The Mothers of Invention weren’t trying to win over hearts but wake up minds too long accustomed to sleep.

Zappa more or less hijacked a working doowop band in creating The Mothers of Invention and much of their debut’s charm, if indeed it has any, is its strange duality of innocence and brilliance. The rest of The Mothers may have been in on the joke, but they weren’t into Igor Stravinsky and John Cage. As a result, you get songs like How Could I Be Such a Fool, Any Way the Wind Blows and You Didn’t Try to Call Me, which are delivered as breezy pop songs while Zappa stirs a musical tempest beneath the surface. The band wasn’t as musically sophisticated as later incarnations of The Mothers, to be sure, but Zappa did luck into a good singer (Ray Collins) and second guitarist (Elliot Ingber).

Freak Out! is divided into two very different halves. The first record features skewed pop songs that poke fun at everything from America’s post-war idealism (Hungry Freaks, Daddy) to the ‘60s counterculture (Wowie Zowie). The second record strikes an even more defiant stance as Zappa calls out American injustice (Trouble Comin’ Every Day) and goes completely off the radar for sound collages that mix dialogue, noise and what probably constitutes music of some kind.

Honestly, this album is a miracle of nature that never would have existed but for the visionary support of Tom Wilson. Most producers would have covered their ears. Wilson, instead, became Zappa’s champion, convincing MGM to give Zappa the latitude he needed to make the album he envisioned. Zappa rewarded that faith with unfiltered genius, the kind that occasioned Wilson to refer to Zappa as “without exception… the biggest talent I have ever come across.” Not Bob Dylan. Not The Velvet Underground. But Frank Zappa. How freaking awesome is that?

All songs written by Frank Zappa unless noted. Arranged and conducted by Frank Zappa.
*Some versions credit this as “I’m Satisfied” on the elpee label.