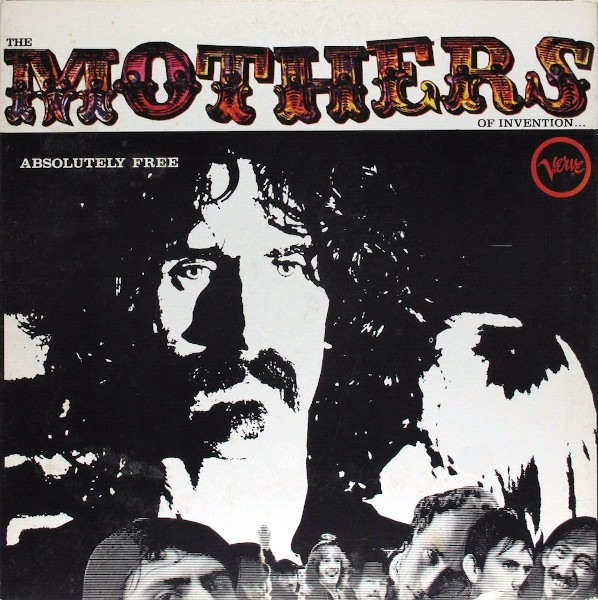 Help me, I’m a rock. I am a small gray lump, dull and indifferent, with no passions (save for this), no empathy and no desire to change. Perhaps this is why people who write music reviews are apt to make “desert island” analogies. It’s not the perfect communion with music they’re interested in, but a complete isolation from human interaction that appeals to them. So, before you ascribe qualities like right or wrong, smart or dumb, to the following text, remember: it wasn’t written by a rock critic, it was written by a rock.

The double-album Freak Out! was a tough play-in-four-acts to follow. Absolutely Free showcases the “lighter” side of The Mothers of Invention, with catchy melodies couched in quasi-classical low-fi arrangements and humorous social commentary. It’s still a serious work of genius, to be sure, but Frank Zappa sweetens the social medicine with silly words and (sometimes) soothing music. Status Back Baby and America Drinks & Goes Home, for example, could pass for pop songs dressed in drag.

There are a lot of pop culture references on Absolutely Free; the Supremes (“Baby Love”), Gene Chandler (“Duke of Earl”) and the Kingsmen (“Louie Louie”) are the obvious links, but I’m sure there are some obscure references that I’ve missed. The arrangements are also more, well, sophisticated isn’t the right word, but there’s more going on in the music with the addition of Bunk Gardner and Don Preston. Honestly, the production on Absolutely Free is all over the place. The drums seem muffled, which is bad when you have two drummers, and the mix is just terrible in spots. Maybe that got better on the remasters; you’d have to hope so.

Absolutely Free contains what I would consider one of the greatest songs of the twentieth century, Brown Shoes Don’t Make It. A kind of mini-opera on the scale of The Who’s “A Quick One, While He’s Away” only better, “Brown Shoes Don’t Make It” is a musical tour de farce. Other classic bits include the opening moments of America Drinks (“Want to buy some pencils?”), the multi-part madness of The Duke of Prunes and the tautly wound combination of “Status Back Baby” and Uncle Bernie’s Farm.

Absolutely Free is one of the easier entry points into The Mothers’ early catalog of prickly pop cacti. Producer Tom Wilson, for better or worse, let Zappa have free reign of the studio from the sound of things. (Too bad he didn’t take the same hands-off approach to Nico’s Chelsea Girl.) Personally, I think Call Any Vegetable and Invocation & Ritual Dance of the Young Pumpkin could have been tightened up, but with Zappa you have to expect crazy doodling in the margins of his calculated art.

All selections composed, arranged and conducted by Frank Zappa.

* Inserted between sides one and two.