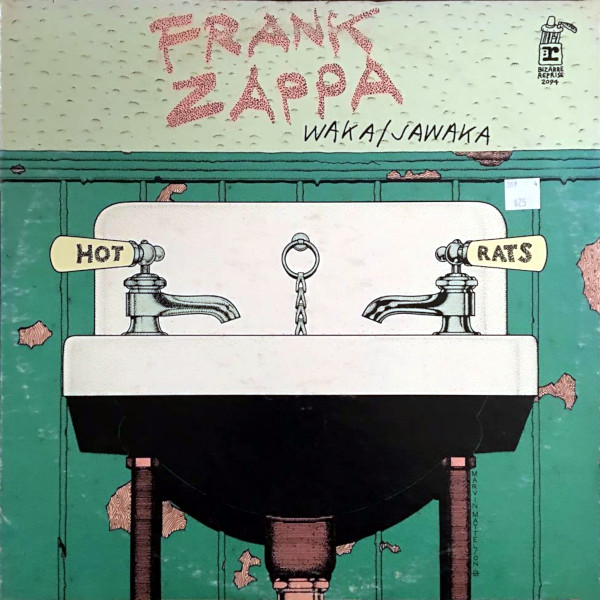 Frank gets pushed from a stage and spends months at home pushing the envelope of musical smallmindedness.

While Frank Zappa was convalescing from an assault on stage that resulted in a paralyzed arm and crushed larynx, he released two jazz-fusion albums with an updated version of The Mothers that now included Tony Duran on guitar, Erroneous (Alex Dmochowski) on bass, Jeff Simmons on guitar/vocals and a full horn section featuring Sal Marquez on trumpet. Containing a pair each of extended instrumentals and mutant blues songs, Waka/Jawaka is sometimes presented by critics as an extension of Hot Rats, a comparison likely occasioned by the album cover’s reference to the album in the illustration (suggested by Sal Marquez). In fact, I’ve done that myself. But what it really is, is a transitional record between Chunga’s Revenge and The Grand Wazoo.

The two songs align almost exactly with “Road Ladies” (“Your Mouth”) and “Rudy Wants To Buy Yez A Drink” (“It Just Might Be A One-Shot Deal”) in terms of their approach and effect on the listener. The two extended instrumentals, “Big Swifty” and “Waka/Jawaka,” are the visions of things to come: surreal semi-classical jazz-fusion giants that amble preponderously in the ear canal for twelve minutes or a lifetime, depending.

Transitional records are arriving, they haven’t arrived. Waka/Jawaka doesn’t arrive at the genius of The Grand Wazoo. Among the great Dubyas (which would winclude Weeny, Wazoo and Weasels), Waka/Jawaka might be the least impressive. Or not. They’re all brilliant records, so it’s a little like picking a favorite Beethoven symphony. The ninth. Okay, so that was easier than I thought. But you get the point: you wouldn’t want only eight Beethoven symphonies, and you don’t want to eke out your miserable, crotch-kicking existence without Waka/Jawaka. Because, truly, nothing will re-inflate your balls like listening to an acid trip about a frog segue into the most beautiful pedal steel guitar solo you’ve ever heard and then careen into “Waka/Jawaka,” knowing that only a small percentage of the general population will ever share that joy with you.

All selections by Frank Zappa.