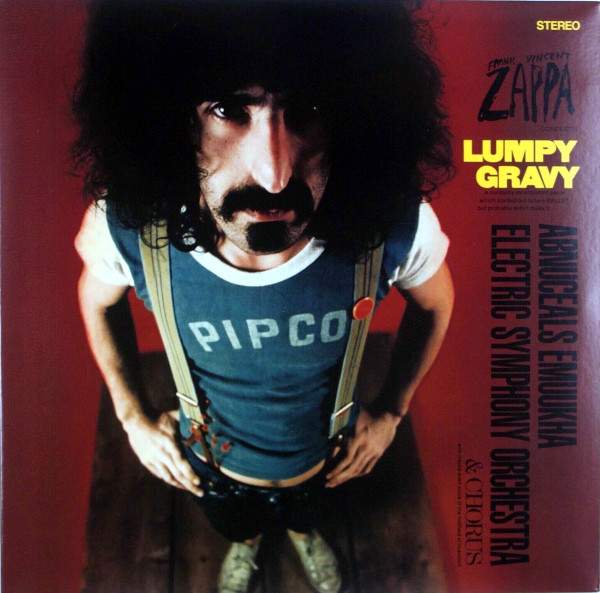 Frank’s music concrète masterpiece sounds like the whole 20th century being sucked into a black hole.

Kronomyth 3.0: Saint Francis of a seizure.

What could be more fitting on the day after Thanksgiving than a little Lumpy Gravy? Frank Zappa’s music concrète masterpiece is the very model of a modern classical marvel. Sped-up classical arrangements, absurd dialogue, surf music and nasal snorting are spliced together in what could be described as a musical seizure scored for orchestra and chorus in thirty tiny movements. As conductor and musical architect (contractual obligations precluded him from actually playing on the record), Frank Vincent Zappa flies fearlessly into the face of ridicule and emerges a genius.

The original version of Lumpy Gravy was released in 1967 by Capitol Records and then quickly withdrawn because of contractual issues with Zappa’s label, MGM. This early version has since been re-issued, but the version of Lumpy Gravy that most fans are familiar with is the 1968 Verve recording which featured additional editing from Frank Zappa. Divided into two side-long parts, Lumpy Gravy is a patchwork of painstakingly orchestrated pieces performed by classical musicians, rock musicians and sundry satellites who engage in strange conversations about violent ponies, living in a drum and car repair. The sum effect is like listening to two generations of America (culture and counterculture) mixed in a blender for thirty minutes.

The music of Lumpy Gravy isn’t entirely removed from contemporary Mothers albums. Zappa had flashed his compositional chops on the second side of Absolutely Free, while two of the more memorable melodies presented on Lumpy Gravy were later re-purposed for “Take Your Clothes Off When You Dance” (We’re Only In It For The Money) and “Oh No” (Weasels Ripped My Flesh). Where Lumpy Gravy is different is its focus on Zappa the composer and not Zappa the comedian/guitarist.

The initial reaction from both the musicians and the general music press was one of bewilderment, maybe mild amusement. The music of Frank Zappa is difficult to take seriously because his sound palette is so unconventional and broad, but make no mistake: Lumpy Gravy is serious music. The whole idea of music concrète was to expand the understanding of music beyond conventional, conservative definitions. Here, Zappa lays down the foundation for a career that would cross between the worlds of classical and rock with equal ease, creating a bridge that few dared to follow but which represented perhaps the most fascinating musical journey of any artist in the twentieth century.

All music written by Frank Zappa.